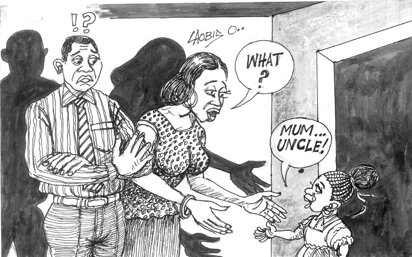 Enugu Police Command has charged to court Chief Wilfred Ogbodo, 78, for alleg­edly raping a nine year old daughter of one of his tenants in Enugu.

Ogbodo allegedly com­mitted the act after he invited the girl to his flat where he subdued her before allegedly commit­ting the crime.

Enugu-based sexual assault referral center, Tamar SARC , has vowed to ensure that Ogbodo faces the full wrath of the law.

Narrating her ordeal to the assault referral center managed by Women Aid Collective(WACOL) and funded by Justice for All (J4A), the girl (names withheld) alleged that her landlord used threats and intimidation to subdue her before committing the wicked act.

She narrated how the suspect identified as Og­bodo, invited her to his flat, while he was alone, stripped her naked and raped her.

The girl’s words: “He used his hands first, to rub my vagina and later, his mouth to have oral sex with me before penetrat­ing inside me. He told me that, though his penis is big, he has to use it on me anyway, and he had sex with me in my vagina and my anus.’’

The girl said she bled profusely and the suspect tried to stop the bleeding by cleaning her vagina with his handkerchief and shirt, before his wife came in unexpectedly.

“While he was clean­ing me up, the wife came knocking at the door. The wife’s knock was so loud that he later opened the door and the wife asked me, what the husband did, and I told her’’ the girl stated.

Reacting to the inci­dent, bewildered parents of the girl expressed shock at what happened to their daughter and vowed to seek justice ensured the treatment of their child, to avoid any adverse medical effect on her in future.

They however, thanked TAMAR SARC for the treatment and counseling of their child, which they noted, was prompt.

It was gathered that, though the case has been charged to court, and the suspect remanded, Tamar SARC’s follow-up on the matter revealed that the case file has been for­warded to the Director of Public Prosecution (DPP) for advice.

Continue Reading
You may also like...
Related Topics:chief, enugu, girl