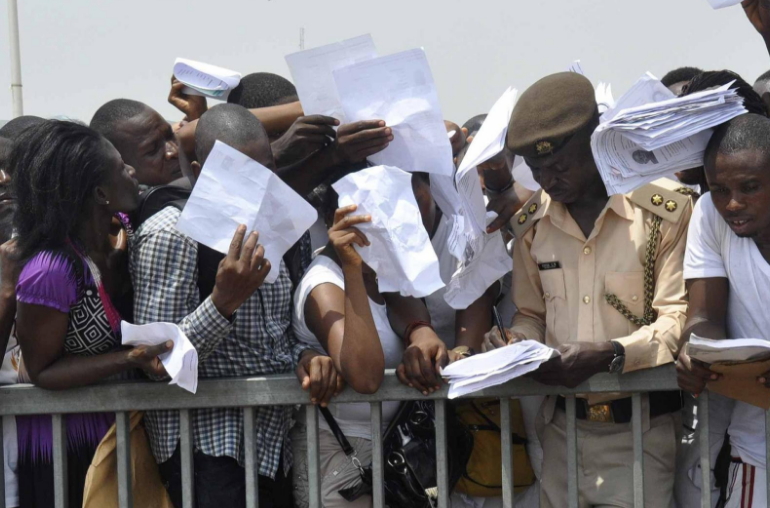 Sept 4, 2016 – 79.9Million Nigerians Are Unemployed As Recession Takes Over…What Is The Way Forward?

I am usually optimistic, a strong believer in the uniqueness of Nigeria’s ability to dance away from the edge of the precipice. I still believe even this present gloomy weather will pass… just that I am so scared, unhappy and my faith is shaky. Yeah, I haven’t seen anything like this since I became an adult. Maybe those who lived through the civil war felt like this. But this is not even war. Why then does it feel like we are under siege? Why is everybody swapping depressing stories of gloom and doom? I don’t even know how we got here.

For me, it didn’t even look like there was a journey, a trip from where we were to where we are. It looks and feels like we slept in one Nigeria and woke up in another Nigeria.
Do you get that eerie feeling of a man who in one minute was listening to Lagbaja on his car radio and the next minute there was a deafening bang, everything goes black, then white and he finds out he’s dead, on the other side. Yeah, a bewildered ghost. The transformation, or is it transition, is so swift and sudden that the ghost finds it difficult to believe it happened. Isn’t that how this whole broke Nigeria, Nigeria in recession, feels?

Things are sad and bad. Even the rich and affluent can feel it. The rumbling stomachs of the hungry is successfully keeping those who are well fed awake. Those who have just lost their jobs are pressuring the finances of those who still have jobs.

Whether technically or officially, the economy is in recession. In layman language, everything is broke; 79.9million Nigerians are unemployed. Companies are folding up totally or relocating to Ghana and other saner climes. For instance, the misfortune of Aero Contractors shutting down its operations will spread misfortune further around. It will affect you.

It will affect me. If 1,200 Aero Contractors lose their jobs, that number of families and their extended families and those they know will be affected. The schools those workers will withdraw their children from will feel it. The mechanics, laundry services will all suffer the spiral effect of that Aero misfortune. And the ripple effects will go on and on. I guess that is why we are all exhibiting the bewildered ghost syndrome.

We are all in trouble. But if it were the regular trouble of ‘just being broke’, it would have been bearable. It is not just about 25 litres of groundnut oil selling for N6,500 two months ago and today it is N13,000. Five litres of kerosene has jumped from N750 to N1,400. A bag of cement which sold for N1,500 in July is now N2,300. Of course, we all know a bag of rice is now N20,000 and we used to buy it for between N8,000 and N10,000 last year. That is the everyday ‘things-are-bad’ complaints. It is not that these are not bad enough or that 100% jump in the price of a loaf of bread is not something to be worried about, it is just that my worry has attained a new level. My real worry is the new and added community of the poor that have emerged.

Consider the story of Moses (surname withheld). He has been on anti-hypertensive drugs since 2010. He has adhered to his doctor’s order to take his drugs daily. But not any longer. ‘ I can no longer afford to take it every day. I know I’m taking a big risk. These days my blood pressure just shoots up unlike when the daily drugs helped to keep it in check. But what can I do? I have bills to pay. I cannot watch my children go hungry or stay away from school.

The drugs that I take are imported and now the price has gone up. Sometimes you can’t even find it. Salaries are no longer regular here (I’m a civil servant).’
Diabetes patients are also involved in this pathetic choice. They are supposed to be on daily medications but they are being owed tons of millions of naira. They have to choose between eating a meal a day or taking their little white tablets and life-saving injections.

This is a new community of men and women who have to make a choice between dying now and dying tomorrow, which is no choice at all, if you ask me. If a man has to use money for his insulin to pay school fees or buy gaari, knowing toxins are welling up in his body, knowing his heart can give up any time, what kind of life is that? A woman has a BP of 200/101 and has to choose between buying a measure of rice and her anti-hypertensive drugs, when her five-year-old son hasn’t eaten since yesterday. The boy has cried and cried and is just lying on his tummy and occasionally asking: ‘mummy, please, I’m hungry…
I’m trying not to cry. Please, someone tell me tomorrow will be all right.

According to the National President of Diabetes Association of Nigeria, Dr Mohammed Alkali, a disturbing 1.56 million new cases of diabetes were discovered in 2015 alone while about five million people live with the disease. It was gathered that most multinational drug companies are finding it difficult to import drugs into the country as a result the consistent drop in the value of the Naira.

A report in the Saturday Tribune last week said , ‘ Mr. Oyekunle Wahab, a retired teacher who suffers from diabetes, said that ever since the doctor diagnosed him with diabetes, 50 percent of his monthly pension is always spent on his medications

“Out of the N30,000 I receive monthly as my pension, I spend over N15,000 on buying strips for my blood sugar test and the insulin injection to regulate the level of sugar in my blood. But of late, government has been paying our pension once in three months and this has stopped me from checking the level of sugar in my blood because my strips have been exhausted and to buy another one now, I will need N3,000. Just last week, I was feeling dizzy and I knew it was because of the Insulin injection I stopped taking, so, I hurried off to the hospital and complained to my doctor who later injected me for free,” he said.

The risks of not using these drugs as prescribed, a medical expert, Dr. Oyewale Durojaiye said may result in hypertensive retinopathy which damages the retinal and in most cases, cerebrovascular disease, mostly known as stroke.

Salami Abimbola, a young Nigerian in his early 20s who suffers from migraine, expressed his parents’ frustration on his N100-per sachet drug (sudrex tablet) which he exhausts in two days.
“My parents say they are tired of buying the drug every day, therefore, I go through pains whenever my dad doesn’t have enough money to buy it,” he said.

There are also communities of children who had started their degrees abroad but have now been recalled to Nigeria. They are depressed and finding it difficult to go on.

New communities of new generation of the desperately poor, desperately sick growing everywhere…
I have run out of space but the heaviness in my heart remains.

7 thoughts on “79.9Million Nigerians Are Unemployed As Recession Takes Over…What Is The Way Forward?”