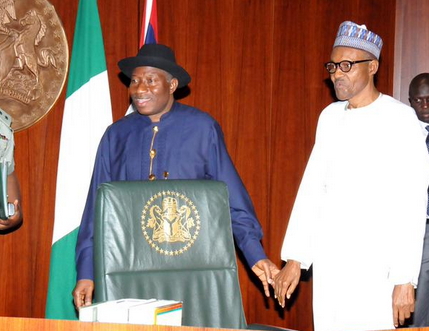 The current Nigerian economic crisis which started in June 2014 has negatively impacted Nigerians ; there is loss of jobs, high cost of goods and services, closure of businesses, owing of government workers, increasing crime rate, and decreasing value of the Naira.

How did we get here? What went wrong? President Muhammadu Buhari’s All People’s Congress (APC) led Federal government of Nigeria blames the 16 years of the People’s Democratic Party’s (PDP) misrule as being responsible for the nation’s current economic woes.

In response to this accusation, the opposition PDP blames the APC led Federal government for lacking the ability to effectively manage the Nigerian economy.

To know how we got to this point as a Nation, we have to look back at our history.

The creation of numerous regional States and Local government areas was done, and they are expected to be funded by crude oil revenues.

The elites from the North and South work together to keep this weak economic model in place, and as a reward for their efforts they partake in sharing oil revenues, which is referred to as ” national cake”.

In the 1980s, the Nigerian economy had a major crisis as a result of unfavourable crude oil prices in the global market, after this bitter experience, successive governments failed to learn a vital lesson on the urgent need to diversify the economy.

Various governmental bodies in Nigeria have talked about diversifying the Nigerian economy away from dependence on crude oil revenues, it has been all talk, talk, with no meaningful actions. During the years of high crude oil revenues, massive looting was the order of the day.

Political leaders were in competition to out-do each other in the looting game.

Over the years, due to easy crude oil revenues, the Nigerian economy became dollarised.

This is how we got to this current economic crisis :

3. The addiction of Nigerian leaders to crude oil revenues: this addiction made them unwilling to take actions in diversifying the Nigerian economy.

4. The poor development and neglect of oil producing areas of the Niger Delta: This has led to oil bunkering, militancy, and willful destruction of gas and oil facilities in the region. The outcome of these acts is loss of crude oil production and revenues.

6. High cost of running the government, the cost remains expensive and wasteful. The government spends close to 80 percent of its annual budget on salaries, allowances, pensions, and over head expenditures.

7. The attitude of Nigerians towards patronizing made in Nigeria goods and services:

Many Nigerians send their children abroad to school, import goods which are available in Nigeria, conduct wedding ceremonies, shopping, medical treatment, and holiday abroad. The effects of these activities is growing the economies of other countries, while the Nigerian economy shrinks.

8. The wide spread looting and fraud in government: officials and contractors engage in stealing of funds budgeted for projects that were intended to promote the Nigerian economy.

9. Money laundering activities by unpatriotic Nigerians: Foreign exchange obtained at the official market is not used for the purpose for which they were granted. Such foreign currencies are laundered for private use abroad. These heartless Nigerians deny genuine business owners foreign currencies they need to operate.

10. The failure of the Central Bank of Nigeria to maintain a stable exchange rate for the Naira.

The Nigerian economy is currently in a recession, to fix the Nigerian economy, the Buhari led Federal government should look away from crude oil revenues, to continue on that path is repeating what previous administrations did that brought us to where we are today.