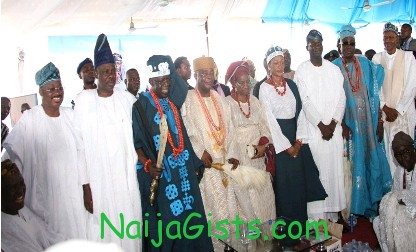 Nov 26, 2012 – Aare Ago Of Egbaland Chieftaincy Title: Many Lies Of Bola Tinubu

Recently Tinubu and his media team had lied about the invitation to the Democratic Party convention in the United States. He claimed he was personally invited by President Barack Obama as the leader of Nigeria opposition.

His academic credentials, name and date of birth have also been dogged by controversy.

This is coming on the heels of reports that that his son Oluwaseyi Tinubu failed his bar examination at the Nigerian Law School, and was not part of the call to bar ceremony on tuesday.

Aare Ago is a chieftancy tittle sub-fused within another of higher ranking. There are different titles and subtitles in Egbaland. There
is the Balogun, the Oluwo, the Ogboni, the Aare and others.

On his Facebook page, spokesman for the National Vice chairman of the Peoples’ Democratic Party in the southwest, Lere Olayinka said , “Under these tittles, there are subtitles. Like Balogun, there are Otun Balogun, Osi Balogun and co, but Balogun is the leader of that group. The Balogun is a front row seater in the palace of Alake and the others queue behind him.”

The Oluwo, it was learnt , has others behind him as well. In the category of Aare, in Yorubaland, the Aare Ona Kakanfo is the leader of that line. And in Egbaland, there is the Aare Onibon, Aare Ago and others.

For instance, Egba Owu (one of the four Egbas – Ake, Gbagura, Oke-Ona and Owu) is ruled by Princes selected from six ruling houses: Amororo, Otileta, Ayoloye, Akinjobi, Akinoso and Lagbedu. These kings are assisted by a core of chiefs known as Ogboni and Ologun. This core of chiefs is headed by the Balogun who has under him Otun, Osi, Seriki, Aare Ago and Jagunna. Ogboni has as their head, the Akogun, Obamaja, Orunto, Oyega, Osupori and Omolasin.

In Egba Owu, Aare Ago is under the BALOGUN.

Like the lies they told on OBAMA’s special invitation of Tinubu to the DNC in US, the claim of Aare Ago as the highest title in Egbaland is meant to shore up the Tinubu’s claim to leadership of Yoruba race, having lost the attempts to secure the spot of leadership of Yorubaland by getting the Aare Onakakanfo title. (Credit: Point Blank News)