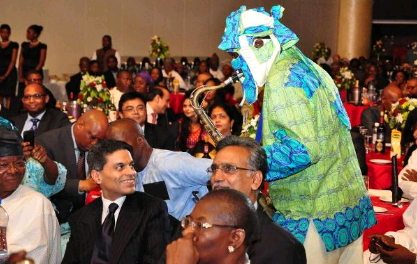 Few months back, the government of Ogun State was put under integrity test when it lined disgraced former Irish Prime Minister Berti Harn to be the guest speaker at the first Ogun State Economic Summit. Then, the state was accused of lacking morality in not considering the reputation of its speaker before he was invited to speak on economic development to potential foreign and local investors.

In a similar chord, one of Nigeria’s leading telecommunication companies, Airtel Nigeria last week stunned many when it brought disgraced CNN presenter and Time magazine columnist, Fareed Zakaria as its speaker in its lecture series. It would be recalled that last August, Fareed was suspended by both the Time magazine and CNN for plagiarising a content in his popular column.

Zakaria who spoke under the theme, Africa’s Political Economy: The Challenge of Leadership observed that a focused investment in human capital development and building strong institutions to safe-guard society from human failings are important requirements for lifting developing nations out of the lowest levels of economic growth.

The cerebral TV anchorman also advised that rather than “subsidizing the present or buying votes, leaders should invest in education, invest in Infrastructure, invest in healthcare and invest in the future.”

Citing Taiwan and South Korea, he further observed that although these countries do not have natural resources, they have emerged strong economies with impressive GDP growth rates because of their efforts in developing human capital and building strong institutions.

He also noted that the United States of America currently exports human capital in Liquefied Natural Gas and other areas because the country had invested in research, training and development in those areas.

Famous afro saxophonist, Lagbaja was hired to entertain the guests including the “august visitor” Fareed. Perhaps, what most guests would have expected Lagbaja to play at the event was late Fela Anikulapo’s hit tune “teachers don’t teach me nonsense”.

After several calsl were made to Airtel’s Emeka Okpara without response, this magazine contacted its public relations consultant, Chido Nwakanma of Sunflower, who promised to get its client’s response and get back to us but did not get back.

FAREED ZAKARIA Suspended From Time And CNN For Plagiarising Content

Well-known foreign affairs specialist apologises for error in apparently lifting a paragraph from a New Yorker story. Time magazine and CNN both suspended journalist Fareed Zakaria in August after he was caught plagiarising from the New Yorker in the latest scandal to hit the world of American journalism, UK Guardian reported.

Zakaria, who writes columns for Time and hosts a CNN television show, had written an article for the magazine on the issue of gun control following the recent mass shootings in Colorado. A short version also appeared as a blog post on CNN’s website.

However, several blogs, such as conservative media watchdog Newsbusters and the National Review online, spotted similarities between parts of Zakaria’s column and a piece on the same topic in an April issue of the The New Yorker.

The paragraphs in question largely involved descriptions of historical events and context about gun control in America and do not seem anywhere near as serious as other famed plagiarists such as Jayson Blair at the New York Times and Stephen Glass at the New Republic who made up entire quotes, people and incidents.

But as media websites picked up the story and asked Time for an official comment, Zakaria issued a statement and confessed to his error.

“Media reporters have pointed out that paragraphs in my Time column this week bear close similarities to paragraphs in Jill Lepore’s essay in the April 23rd issue of The New Yorker. They are right. I made a terrible mistake. It is a serious lapse and one that is entirely my fault. I apologize unreservedly to her, to my editors at Time, and to my readers,” Zakaria said.

Time then announced it was suspending the writer for a month and possibly longer.

“Time accepts Fareed’s apology, but what he did violates our own standards for our columnists, which is that their work must not only be factual but original; their views must not only be their own but their words as well. As a result, we are suspending Fareed’s column for a month, pending further review,” said a statement by Time spokeswoman Ali Zelenko.

CNN also suspended Zakaria and did not put a time limit on it. “We have reviewed Fareed Zakaria’s TIME column, for which he has apologized. He wrote a shorter blog post on CNN.com on the same issue which included similar unattributed excerpts. That blog post has been removed and CNN has suspended Fareed Zakaria while this matter is under review,” the broadcaster said in a statement.

Indian-born Zakaria is one of the most familiar faces in American journalism. Before he joined Time he was a longstanding Newsweek writer, and he is also the host of the CNN show Fareed Zakaria GPS, which focuses on international issues. He has also written numerous books.

It is not the first time that Zakaria has been accused of falling below what is accepted in the world of journalism.

In 2009, Jeffrey Goldberg, a national correspondent for The Atlantic, claimed the then Newsweek columnist stole a quote of his for a cover story on Iran.

In a blogpost which has been widely recirculated since Friday’s revelations – Goldberg alleged that Zakaria tried to pass off part of an interview with Israeli prime minister Benjamin Netanyahu as his own work.

“Are there any good quotes from Zakaria interviews with world leaders that I could lift for the Atlantic?” Goldberg asked.

The plagiarism incident that led to Zakaria’s suspension is merely the latest in a long line of acts of plagiarism that have been spotted at all levels of American journalism.

The New Yorker itself was recently involved in a scandal after one of its newest hires, popular science writer Jonah Lehrer, “self-plagiarised” from some of his own earlier columns.

Lehrer survived that moment and kept his job but it was later revealed he had also made up some Bob Dylan quotes for his latest book. That title Imagine was then withdrawn from sale by his publisher and he was sacked from the New Yorker.

Lehrer joins a list of journalists who have fallen short of accepted good practice of late. Earlier this week Nevada Appeal columnist Bob Thomas was exposed for having apparently copied large parts of a widely circulated and 13-year-old internet essay on America’s Founding Fathers and passed it off as his own column.

Last month the New Canaan News in Connecticut sacked reporter Paresh Jha for fabricating quotes and making up interviews in at least 25 different stories. In June the Wall Street Journal fired intern Liane Membis after it was discovered that she had also made up names and quotes for an article about the re-opening of a bridge in New York (Source:News Of The People)