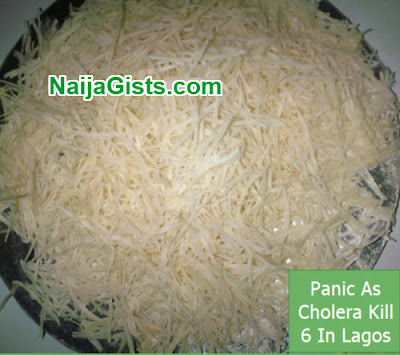 September 22, 2016 – Abacha Salad Blamed For The Cholera Outbreak That Killed 6 In Isolo Lagos

LASG says it has recorded six deaths from cholera outbreak out of 45 cases in some communities in Isolo Local Council Development Area (LCDA).

Dr Jide Idris, the State Commissioner for Health, who made the disclosure on Thursday at a news conference in Lagos, however, was not specific about the timing of the incident.

Idris said that state government was already taking appropriate measures and had contained the outbreak.
According to him, the ministry was notified of an upsurge of diarrhoea diseases in some communities in Isolo LCDA.

“Following this, 45 cases were line-listed by the Epidemiology Unit of the ministry.
“Six deaths were recorded among the 45 cases.
“Majority of the cases did not present with the classical rice-water stool, rather they presented with atypical diarrhoea and vomiting.
“Ano-rectal swabs were collected from 15 cases and taken to the Central Public Health Laboratory, Yaba.
“Initially, there were no growths; however, continuous culture yielded Vibro cholera from seven out of the 15 samples,’’ he said.

The commissioner said that the “Vibrio cholera was later confirmed to be Ogawa strain”.
He said, “The main suspected source of infection is the salad called `Abacha’, a staple food of the residents of Isolo LCDA and adjourning LGAs/LCDAs.

“Some domestic wells within the communities are also suspected.
“Samples of the ‘Abacha salad’ and well water were collected and sent to the Lagos State Drug Quality Control Laboratory for analysis.

“The report of the analysis revealed the presence of Vibrio cholera, Salmonella species and E.coli in `Abacha’ and one of the two well water samples.”

NAN reports that Cholera “is an acute diarrhoea disease with or without vomiting caused by a bacteria referred to as Vibro cholera, and it is transmitted through ingestion of food or water contaminated with infective faeces.

Pastor Asks Miracle Seeker To Bring All Her Jewellery For Prayer, Converts Them To Personal Use
Photos: Italian Artist Names World’s Most Expensive Pay Toilet ‘America’