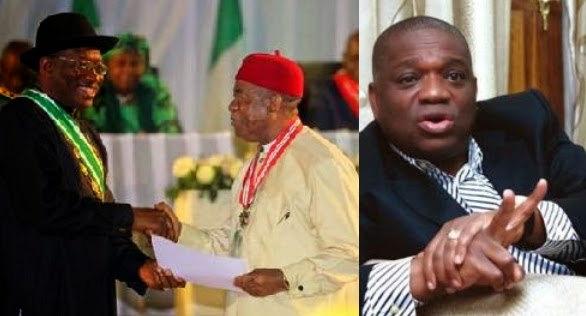 Jonathan’s loyalist and the former governor of Abia State Orji Kalu has realised that the oga on top is politicizing this National Award of a thing.

In a recent press statement, Orji Kalu blames Jonathan for giving national award to a man that hasn’t done anything reasonable in his state.

For the past 3 months, Kalu has been going after Theodore Orji for looting Abia money.

Read his statement below:

“I find it offensive and an affront on the collective psyche of our people that Chief Theodore Orji should have the temerity to stand up to anybody who challenges his excesses, when he should have buried his face in shame. It is only in a society as ours that laxity and sleaze are openly rewarded. Take for instance, the confer­ment of a national honour of CON on him. What justification did the handlers of the award have for bestowing such an honour on a man that has mindlessly and recklessly pillaged the resources of his people?,”.

I hear this award is arranged by lobbyists in Jonathan administration. #pay and get award