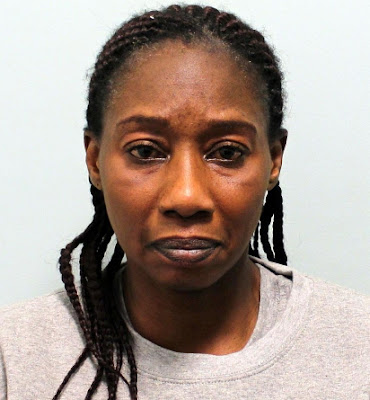 A caretaker from Nigeria who tried to murder a 90-year-old widow by bludgeoning her over the head and stabbing her in the neck in an attempt to steal £31,000 savings has been jailed for 21 years today.

52-year-old Abosede Adeyinka burst into Pam Batten’s home, knocking her to the ground before striking her twice with a hammer she had hidden in her handbag.

When Mrs Batten pleaded for mercy, Adeyinka grabbed a kitchen knife and threw it “like a dart”, leaving it embedded in the pensioner’s neck.

Adeyinka, a mother of three, had been the carer for Mrs Batten’s late-husband, Ernest, in the last six months of his life, and knew there were bags of cash hidden around the semi-detached West Drayton home.

She covered her face with a red lace scarf during the shocking attack, but Mrs Batten recognised her immediately as the professional carer who had visited her home three-times-a-week.

Mrs Batten said the horrifying attack has shattered her confidence, making her afraid to be home alone at night or speak to strangers, and terrified she will be attacked again.

Adeyinka, a charity worker and Sunday school teacher, burst into tears and wailed loudly as Judge Peter Clarke QC jailed her for 21 years at Blackfriars crown court this morning.

“As far as you were concerned, once she had identified you, she had to die”.
“You have shown not one iota of remorse. You planned a burglary with gloves, a mask and a hammer, it was for gain, and your victim was especially vulnerable.
“You previously owed her a duty of care and she will live all her last days in fear.” – Judge Clarke said

The court heard Adeyinka, an agency carer for Avant Healthcare Services, ambushed the pensioner when she was home alone on the evening of April 27 this year.

Knowing Mrs Batten’s husband had “squirrelled” away cash around the semi-detached home, she planned to burglar the house and, believing the pensioner was out she went to get a key which she knew was hidden round the side.

When Mrs Batten opened the door and called out her name, Adeyinka barged through the front door and knocked Mrs Batten to the floor.

She pulled a hammer from her handbag and hit the widow at least twice over the head as she lay defenceless on the ground.

She grabbed Mrs Batten’s handbag, as the pensioner pleaded with her: “Please don’t hit me”.

Prosecutor Kevin Barry said Adeyinka then grabbed a kitchen knife and threw it “like a dart at the victim’s throat”, leaving it embedded in her neck.

“The defendant was aware of the cash in the house, and went there on the day in question to steal that money,” said Mr Barry.
“Finding Mrs Batten at home and having been recognised by her, she attacked and attempted to kill her.”

Adeyinka fled from the house empty handed after Mrs Batten said that her son was due to visit that evening, but her coat and bag were covered in the pensioner’s blood.

Mrs Batten was found lying in the hallway by a neighbour, and was close to death when she was rushed to hospital for emergency surgery, the court heard.

In a victim impact statement, Mrs Batten said she is now “nervous at night” and “scared someone is going to come to the door”.

“Before the attack, she felt lonely because her husband had died, but not afraid like she is now”, said Mr Barry.
“Mrs Batten now regularly uses a Zimmer frame to walk because she is unsteady on her feet and frightened to walk without it.
“The hammer blows affected her vision in her right eye, and Mrs Batten said she has changed after the attack.
“Before, she was the sort of person who was friends with everyone but now she is frightened if someone speaks to her.
“She is nervous and wonders why this happened to her, she has lost confidence and worries she will not be able to face things in the future.”
Tyrone Silcott, mitigating, said the evidence suggests Adeyinka did not go to the house intent on murdering Mrs Batten.

“At some point, she was recognised, and it appears that was the spur for an impulsive attack, seeking or attempting to kill Mrs Batten”, he said.

He said Adeyinka had worked two jobs to support her three children, spent years volunteering for charity, and worked as a Sunday school teacher at her church.

Adeyinka’s niece, Olajumoke Williams, told the court: “On behalf of our family, I express great sympathy for all the Battens have been through, and I hope you can move forward in peace.”

Adeyinka, from Hayes, west London denied attempted murder at trial but was convicted by a jury.

The judge also imposed an indefinite restraining order on Adeyinka contacting Mrs Batten and her family or going to her home.