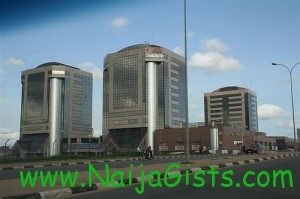 According to a report NaijaGists.com obtained from Linda Ikeji, a top executive at NNPC in Abuja, Hajia Afshatu Abdullahi has been murdered by her driver.

According to her job situation, she’s required to live most of the time in Abuja while her family resides in Auchi.

She went home from time to time to spend time the family. Afshatu lived alone in a house located off Ladoke Akintola Boulevard, in Garki. The only other person who lived with her was a male house help. There were two other men around her, her driver, who didn’t live with her, and a security man who lived inside her premises.

Last Sallah holiday, weekend before this last one, her family was expecting her home in Auchi. She called her husband and told him she was on her way to see them. She never showed up. All efforts to reach her on the phone proved abortive. Her husband tried to reach her at work, no one had seen her. He then set out for Abuja in search of his wife.

The search party got to Afshatu’s house last week to find the house abandoned….aside from the security man, there was no else there. The security man said he hadn’t seen his madam for a few days and assumed she had traveled. They broke into the home and found the place in disarray. Many expensive furniture missing, her jewelry gone, it was obvious the house had been burgled.

While searching, the husband opened the freezer in the kitchen and discovered Afshatu’s body inside with lacerations on her neck and other parts of her body. They called the police. https://naijagists.com

Neighbours told police they had seen the house help driving the woman’s SUV some days earlier but thought nothing of it. It was apparently an in-house robbery and murder, perpetuated by two men she trusted, her house help and her driver, who have since disappeared with her two cars, including a 2011 Toyota SUV, her cheque book, as well as cash she always kept in her home.

The security man found at her home is the only person being held for her murder at the Garki police station and he claims not to know anything about her murder. The two murderers are still at large. Investigations are still on. https://naijagists.com

If you are a woman who lives alone…mind the kind of people you allow into your home. You are vulnerable…people can take advantage.

This is very sad may her soul rest in perfect peace !