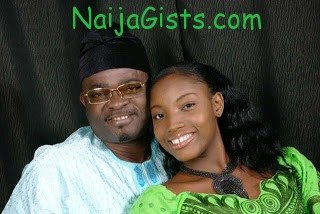 Oyebanke Oyelami who was crowned this year’s Miss Osun State is 23 year old.

The young and dynamic legislator who was a movie actor, producer, auto dealer, hotelier and an accountant at the Nigeria National Petroleum Corporation, NNPC before joining politics recently stepped out with beautiful Oyebanke, the reigning Miss Osun State and this has started generating controversy in some quarters as some bad belles have said the man dumped his first wife for the beauty queen.

According to him in a recent chat with your darling magazine, National Enquirer, “there are things people don`t know and instead of minding their business, they meddle into other people`s privacy, as a matter of fact, I recognize the fact that am a public figure by my present position as a lawmaker but I also know that some facts must be put straight for future purposes”, he stressed.

Speaking further, the lawmaker who has been adjudged as one of the best in South West going by his impressive track records and various projects that have touched many lives has this to say, “naturally it is not in my habit to discuss my family especially my wife who bore me my grown up kids but just for the records, people need to know that my wife has left me ever before I got elected into the federal house of representatives and I`ve since given her the benefit of doubt for reconciliation but all were to no avail, hence my decision to move ahead and not without the consent of my children”, he explained.

Answering question on the interest in the new liaison, the lawmaker who has just been given a chieftaincy title of Bobagunwa of Ila Orangun by the royal father, Oba Bolarinwa said what interest him in his new wife is that, she is the first ever lady that will call his bluff despite his status, “can you believe that, it took me a while to chase this lady, I have never her rare type before, that’s why I didn’t waste any time when she eventually gave me the chance because I need to proof to her that, I mean serious business”, he told. (Credit: National Enquirer)

Their white wedding is set to hold later next year.