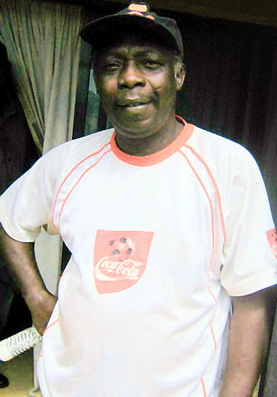 So how did you become an actor?

I got home from work one day and saw my friends going out. I asked where they were headed and they said that they were going for rehearsals. Since I was bored at home, I decided to accompany them. When I got there, they were rehearsing for a forthcoming show. One of the cast did not get his part right and this angered the director to the extent that he considered stopping the show. I don’t know where I got the boldness from, but I voiced out that I could play the part. I was given a chance and my performance was outstanding. I got a standing ovation and people even laughed their hearts out. That is how the director accepted me. Ironically, my friends that took me to the rehearsal are no longer actors today. When one of them saw me in Oshodi sometime ago, where he is now a bus driver; he was telling people that he was the one that introduced me to acting, but nobody believed him. To prove his point, he asked someone to call me and when I went to meet him, I hugged him. He then began to tell people again that he introduced me to acting and I confirmed his story.

Your education stopped at the primary school level, but your spoken English is fairly okay, how come?

It surprises me too. I love English language and I endeavour to learn it anytime I have the chance. Whenever I interact with people, I try my best to learn one or two things from them. I could not further my education after primary school because my parents could not afford it. My father wanted me to go to school and he was always sad when he saw other kids go to school, while his children stayed at home for lack of funds. I passed the common entrance examination to attend Oko-Ode Grammar School in Kwara State. I tried my best to get money for education but it was not possible. I can read. I speak English occasionally and I do not care if I make mistakes because people would correct me and I would learn through that. Back then when I was working at UTC Hardware, I once made a very funny grammatical error, thinking I was right. I told my boss that I was ‘an incorrected man’ instead of ‘a correct man.’ When I said it, everybody laughed but they eventually corrected me. People may laugh at you but they would correct you.

Do you regret not completing your education?

No, I have no regrets. I believe that everything happens for a reason. I tried my best but it did not work out. What I did instead was to ensure that my children never went through what I passed through. Maybe if I had completed my education, it is very possible that I would not become an actor and venture into another business. It pays to study but I thank God for where I am today.

When you were a house help, did it ever occur to you that you would be a household name?

It never occurred to me. All I was praying to God for was to have some money to open a small shop and become a trader.

How would you describe your experience when you were duped as a producer?

That was in 2001. At that time, we felt that it was quite prestigious to produce a movie. I got some money from my friends and I produced the movie. It was a commercial success, but the marketer messed me up. When the movie was in demand, the marketer promised me heaven on earth. He said he would buy me a car, among other things. When it was time for him to give me my money, he began to tell me different stories.

Don’t you feel threatened by the likes of Mr. Latin, Baba Suwe, Sanyeri, Adekola Odunlade, among many other comic actors?

We are all friends and we relate like a family. Whenever we are together, we all laugh. Whenever I see the likes of Sanyeri, Odunlade, they hail me and greet me with respect. We all joke a lot. I don’t see them as a competition; in fact, they create more jobs for me. There are times when I feel I have been at home for too long and I need an acting gig, all I do is call Mr. Latin and he would invite me to Abeokuta. We all relate like one big family and there is no rivalry among us.

Whenever you wooed a girl as a youngster, did she ever take you seriously?

I hardly did that. It took a long while before I began to woo ladies. I learnt a lot from my father, who married only one wife. He always told us to be patient and wait for the right time before embarking on anything in life. Whenever I wanted to woo a woman, I always wondered what I would do if she got pregnant and the thought always dissuaded me from acting on my urges. I had female friends but nothing amorous. On few occasions when ladies would tell me they wanted to come to my house, I always discouraged them from coming because I did not want any trouble. I did not want a scenario where someone would get pregnant for me when I was not ready. For a long while, my neighbours thought I was impotent because they never saw any girl pay me a visit at home as a bachelor.

We learnt you met your wife on a movie set.

Yes, it is very true. She came to see her sister who was an actress. Her sister was a very morally upright lady. Her sister knew that I was a serious person, but was unsure if I was married. When I approached her, she was reluctant. It took a long while before she granted me audience, but she insisted that I must be the one to come to her house because it was against her principle to visit men in their homes. I went to her house one day and I was amazed because they were God-fearing people. I decided I would marry her because her family was not the type to toy with. Eventually when we began dating, she came to visit me to ensure that I was not married because people were telling her to be careful as I could be a married man. When she came to my house, she inspected it to be certain that I was not married before her mind was put to rest. She asked me and I told her that I was never married.