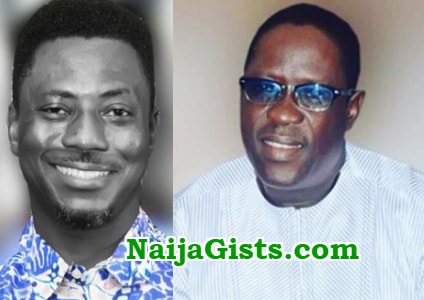 Do you know Rilwan Alesh Onilegbale? Probably not because fans are more familiar with his face in movies than his name.

In this chat with Olowoyo Ganiya, the actor talks about his career and other issues that may interest his fans.

How did you become involved in acting?

I became an actor based on the passion I have for acting and the opportunity of being so close to those I have always regarded as my bosses in the industry. That is because we were so deeply connected back in the hood then.

What role did your background as a member of the prominent Onilegbale family play in your choice of acting?

As a great grandson of the royal lineage, it’s a plus that I am from the royal family. Simply put, that is because royal blood with a combination of fame and celebrity are things that have really pleased members of my entire family. Even the traditional head or chief of the family is so proud of me based on how much I have elevated the family name. And acting is a veritable platform for such. In truth, there are not many avenues through which one can do that.

Do you agree with the notion that you are one of the most underrated actors in the Yoruba section of Nollywood?

Well I won’t accept the notion that I am underrated because in life we have to live with the reality of our circumstances. And by that, it means we can hardly be blessed equally as God himself doesn’t do things in equal measures to all human beings. I might not be at the top of the profession or as some people expect but I am confident in the fact that I am well accepted within and beyond the industry. Also, I have never performed below par in any role or venture I have had to undertake in the industry since I have been involved. There is a reason why I am not frequently featured as before. That is simply because of my decision and disposition to get involved in politics. Knowi n g how intense that can be, all the times and periods I was running for elective posts, I was hardly ever available for movies but do take pains at least once in a year to produce a movie of my own. Such efforts were mainly to keep me grounded and aware of the things that were happening in the industry. So going by this, how do I agree that I am underrated when it’s not that I have had opportunities to grow higher and I have not explored them? By and large, I am still not where I want to be. I was actually somewhat distracted by politics but I am happy and I thank God that I’m still relevant in the industry till date.

Is there a reason you have not featured really in the English section of Nollywood?

Well, I believe featuring in movies is basically down to invitations because professionally, it’s when a producer sees the potential in you for a particular role in the production that’s when you get invited. And since there hasn’t been any invitation from anywhere, well it’s fine but there are two English productions by Saidi Balogun & Iyabo Ojo that I had featured in. Just that I really don’t remember the titles right now.

Who would you refer to as the major inspiration behind your decision to become an actor?

As I mentioned earlier, there were a number of my bosses who inspired me back then and they include Alhaji Taiwo Hassan (Ogogo), Alhaji Ganiu Yinka Quadri, Alhaji Tajudeen Abbey Olanrewaju. These were the main inspirations for me to join the industry fully after my secondary education.

Which do you consider your most striking film so far?

That has to be the movie titled Ire nwami Nitemi in where I played the lead role as the character, Ariremako.

Have you produced any movie since you became an actor?

Yes. Apart from being an actor, I have numerous productions to my credit as a producer.

How true is the popular notion that the Yoruba movie circle is based on helping one another as opposed to earning your pay as an actor?

That is not true. You see, everywhere in the world, people do lots of things based on their own discretion, so if you hear of someone being nice to any producer, it doesn’t mean it’s a tradition or that must just be the way things are done all the time. It’s actually still the normal way professionals deal with each other that we work with ourselves, at least the notion doesn’t say it’s by force. If I am called for a job, I do talk about the terms and also dwell on the amount involved. If it’s okay for me, I go for it, if not, I stay back. It’s as simple as that.

What is the most embarrassing situation you have faced with a fan in your career?

There was a day I was driving, in fact I was rushing to meet up for call time at a location and one bus driver scratched my car. And when I ran after him so as to stop him and get him to fix the damage done to my car, passengers in the bus stood between us and turned to me. They started telling me that they are my fans, they are the ones watching my movies. While the damage done to my car was really terrible, I ended up leaving sad and a loser as well.

What has your membership of the Odunfa Caucus done for your career?

It has been a major boost in my acting career and I am really grateful to the caucus.

Looking at it as a whole, how many years have you put into Nollywood?

I have put in almost three decades as far as I can remember.