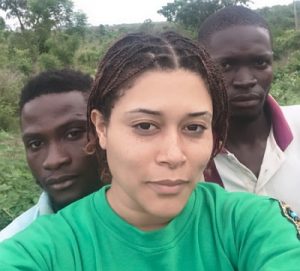 Nollywood actress Adunni Ade was returning from Ilorin to Lagos around 4am today when she had a flat tyre as she was trying to avoid getting hit by a speeding trailer.

All efforts to get motorist to assist her failed as no one stopped for fear of getting attacked.

Hours later, two young men inside a trailer stopped by to help her.

Here is how she narrated her ordeal on the social media today.

“One of the scariest moments of my life.
I started my journey back to Lagos from Ilorin at 4:00am. An hour into the journey, I arrived at Ogbomosho on a narrow road.

All of a sudden, a trailer coming on high speed with full headlight swarved towards me. My heart skipped several beats! I thought that’s it! Trying to avoid getting hit, I drove off the small road and boom! My tyre was gone. It took me a while to get myself together, came out to check the damage. It was dark, no streetlights. I was scared! My mind went blank. I thought of the worst. 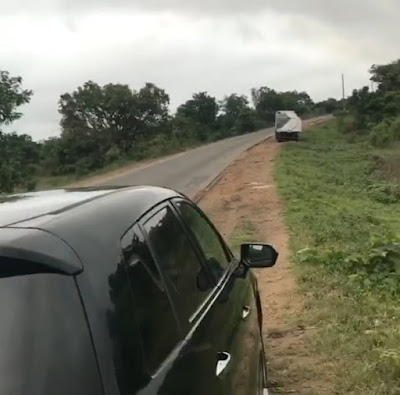 Summoned enough courage to get out of my car for the 2nd time to ask travelers for assistance. None stopped! Some slowed down but where to scared to stop as it was still dark.

Finally! A trailer stopped and reluctantly decided to help. It would take 3 hours to take the tyre off. Eventually, it was removed.

These 2 men saved me!
Abbey to the Left said he’s conscience wouldn’t have allowed him to drive off!
I guess my job on this earth isn’t completed yet. Thank you to everyone to checked up on me.
Special thank you to @peterucomedy1 for making sure the tyre was replaced. 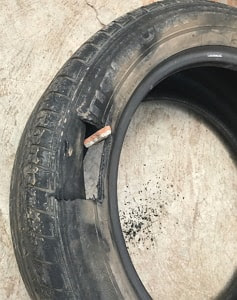 Simple things can be avoided. Their is an ongoing (well it has been spotted for years) road construction that can be completed. When simple contracts are awarded, please let’s get them done. Stop using Government funds to fund your lifestyles.

How can one of the Richest countries in Africa not have good roads, or simple amenities like Streetlights? All these money y’all eating, cannot be taken to your grave when you’re no more.

To those in power, please do the needful. Make Nigeria a better Country. A road wide enough to only contain a trailer been shared by other cars?”.

Watch the short video clip she shared few hours ago

Adunni Ade gets liver o… Driving on Nigerian roads around that time is dangerous.