Few minutes after the declaration of Nigeria as the new Champions of Africa, proud Super Eagles footballer John Mikel Obi, Captain Joseph Yobo and others took the field to run with the trophy.

According to sources from South Africa, the kind of excitement Nigerians experienced in South Africa today has never been seen before. 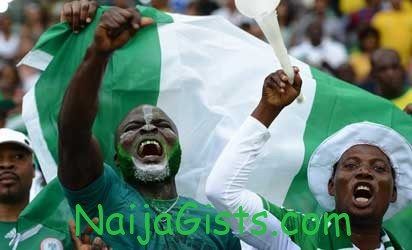 People were shouting on the top of their voices, rolling on the floor and a lady even took off her wig while running all over the place…….. said a source from South Africa.

A Nigerian man based in South Africa who has vowed never to return to home until our victory in AFCON 2013 said he is going home to book his ticket today….

The Super Eagles whom the Ivorian Elephants called Super Chickens are now the Champions of Africa.

What else can we can say? Thanks to the Super Eagles for making us proud.

A special thanks to Sunday Mba who scored the goal and Victor Moses, the champion of the game….