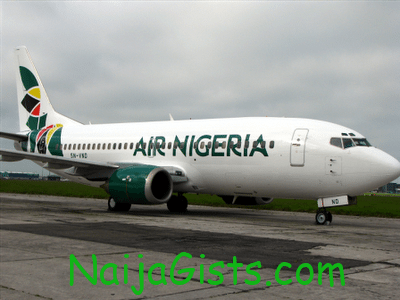 Air Nigeria’s planes which have been grounded for more than a week will remain grounded until the airline completes a compulsory safety audit, the Nigerian Civil Aviation Authority, NCAA, said Tuesday.  The planes may start flying again tomorrow.

Air Nigeria’s aircraft pilots and engineers went on strike a week ago over unpaid salaries and the action grounded the airline’s domestic and regional operations since then.

They have since suspended the strike action and Air Nigeria is will resume operation after a successful safety audit is completed.

The airline said today that it might resume operation on Thursday.

“Air Nigeria wishes to inform that its normal flight operations across the domestic and regional routes will resume on Thursday, 14 June 2012.

“The post-strike audit is a standard practice in civil aviation to ensure safety standards.

“Air Nigeria is committed to offering safe and secure air services at all times and will always adhere to internationally recognised practices. Our daily scheduled flights to London have been operating and were not affected by the audit,” Samuel Ogbogoro, Media Relations Manager of Air Nigeria said today in a statement.

NCAA spokesperson, Sam Adurogboye said he expects the airline to resume after the audit is completed.

“We didn’t ground Air Nigeria. The airline grounded its own operations when its staff went on strike. It’s mandatory that we look at its aircraft again since they were on ground while the strike lasted. As soon as we are through with them  and we are satisfied, they will resume operation,” Adurogboye said.

Continue Reading
You may also like...
Related Topics:air, grounded, nigeria