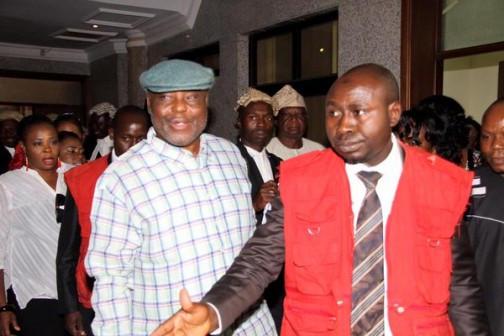 The founder of DAAR Communication and AIT (Africa Independent Television) was today ordered to return to EFCC custody after he was arraigned before a High Court in Abuja on 6-count charge of money laundering and fraud by the EFCC.

Dokpesi who was arraigned alongside his company, DAAR Investment Holdings Limited was accused by the Federal government, through Rotimi Jacobs, SAN, the prosecution counsel of receiving the sum of N2.1bn from the office of the National Security Adviser (Dasuki Sambo) between October 2014 and March 19, 2015 for the Peoples Democratic Party’s presidential media campaign in breach of provisions of the Public Procurement Act, Money laundering Act and the EFCC Act.

Justice Kolawole has fixed the trial of the media mogul for February 17, 18 and March 2 and 3.

He’s the brain behind damaging documentary that targeted Buhari and Tinubu during GEJ Presidential campaign in March.