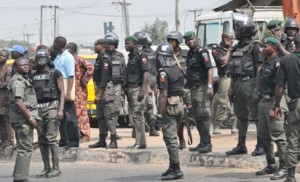 2 notorious cult leaders have been gunned down by the police in Delta State during separate operations.

We learnt that 26-year-old Chukwudi Opobo, aka Okonam, was killed on Monday, June 22, while he led a robbery gang to unleash terror on residents of the Ugiliamai area of Kwale, while the other gang leader was shot dead in Ogbeofu Quarters, Ogwashi-Uku.

Our correspondent gathered that Opobo, said to be a leader of Aiye Confraternity, opened fire on an anti-robbery police patrol from the Kwale division, which came to the area after a distress call.

During the gun battle, he was shot and arrested, while his two gang members reportedly escaped with bullet injuries.

The items recovered from the cult leader, who died while being taken to a hospital, were one cut-to-size gun, two live cartridges, and one battle axe.

In the Ogwashi-Uku incident, the cult leader reportedly led his gang members to the Ogbeofu Quarters, and robbed the residents at about 11pm on Wednesday, June 17.

Policemen from Ogwashi-Uku division, who came to the scene, reportedly engaged the cultists in a shootout during which the gang leader was shot dead.

Other suspects were said to have escaped into the bush with injuries.

Our correspondent learnt that the Special Anti-Robbery Squad patrol team in Agbor also killed a suspected robber during a shootout.

The unidentified suspect, allegedly robbed a woman, identified only as Lillian on MTD Road, Agbor, when the patrol team intercepted him and he reportedly opened fire.

He was said to have died while being taken to the hospital for treatment.

The Delta State Commissioner of Police, Alkali Usman, who confirmed the incidents, said investigations were in progress and efforts were being intensified to get fleeing gang members.

He said, “The items recovered from the cultists at Ogwashi-Uku were one cut-to-size English double-barrelled gun, two live cartridges and four expended cartridges. “Efforts are on to track the fleeing miscreants.

“In Agbor, our Special Anti-Robbery Squad team arrested four pupils of a secondary school as suspected cultists. The pupils, who were from Agbor Alidimma Secondary School, were on their way to Isumpe in the Ndokwa West Local Government Area for an initiation ceremony.”