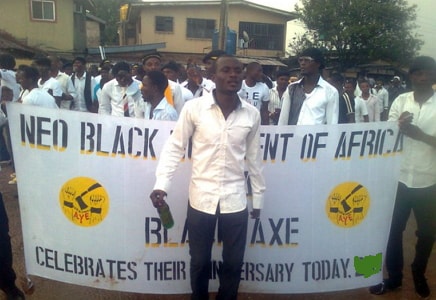 “The Lagos State Police Command, have received credible intelligence that members of some unlawful societies such as the Aiye, Eiye, Black Axe, Buccaneers, etc, are going round town serving notices to rival cult gangs in the neighbourhood that they would be converging on Saturday 7/7/ 2018 at yet to be disclosed locations within their domains.

According to available information, the 7th day of the 7th month is sacred to these outlaws especially the Aye or Black Axe confraternity which marks its anniversary. It is also a day they settle scores with rival cult groups and a day of outright brigandage and anomie.

The Commissioner of Police, Lagos State, CP Imohimi Edgal, warns that any such gathering by members of the unlawful society will be viewed as an unlawful assembly with the intent to commit felony. And those that gathered will be visited with the full weight of the law.

He reiterates that no cult group will be allowed to compromise the peace daily nurtured by men and women of goodwill in the state and maintained by the police.

He, therefore, urges members of the public to blow the whistle on these brigands anywhere they are found.

In the same vein, the CP urges parents to warn their children who are members of these nefarious associations not only to renounce cultism, but denounce it in all its ramifications.

Continue Reading
You may also like...
Related Topics:lagos state, news

Nigerian Actress Who Can’t Stop Stealing, Yetunde Akilapa Appears In Court For Burglary & Stealing
Nigeria Man Burns Himself Alive At Omole Phase 1 Ojodu Lagos Over Hardship, Says Nigeria Is Under A Spell That Can’t Be Cleansed