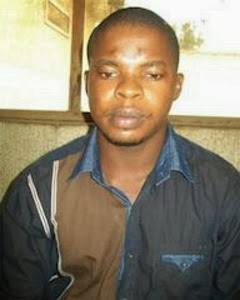 A popular electronic seller at Alaba market in Lagos has been arrested for illegal drug exportation.

The man pictured above is currently under investigation in connection with exportation of 450 g of methamphetamine to Malaysia, Nigeria’s anti-drug trafficking agency said on Wednesday.

The National Drug Law Enforcement Agency, said the suspect, Olewunne Chibuzor Darlington, claimed he invested N900,000 in drug trafficking with the hope that he would reap N5 million.

Darlington was arrested by the NDLEA officers at the Murtala Muhammed International Airport in Lagos.

NDLEA commander at the Lagos airport, Hamza Umar said Darlington was found to have ingested narcotics.

“The scanning machine revealed that the suspect ingested drugs during screening of passengers on an Ethiopian Airline flight. He was on his way to Malaysia but during observation, he excreted 450 grammes of substance that tested positive to methamphetamine,” Umar said.

NDLEA quoted the suspect as saying in his confessional statement: “They told me that I can make five million naira profit if I invest nine hundred thousand naira. It was a trial business for me because it is my first time. I also did it out of my financial predicament. I am from a poor family and the eldest”.

Chairman/Chief Executive of the Agency, Ahmadu Giade while commenting on the arrest called for stiffer punishment for drug traffickers.

“No doubt, stiffer punishment will help in reducing cases of drug production and trafficking. We shall prevent drug traffickers from using the country as a transit point for drug trafficking,” “It is sad that a businessman will prefer to invest in criminality when there are countless legitimate businesses” – said Giade