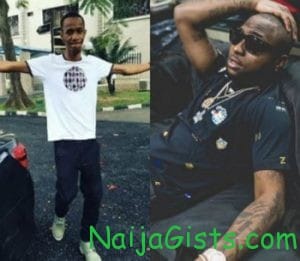 I intend a pun of how the death incidents that have trailed pop singer, David Adeleke, aka Davido, in the last one week are turning out. Pardon me if this offends sensibilities in view of the departed souls; life itself is such an ‘irony’.

In case you’re just reading this for the first time, three acquaintances of the rave singer died in mysterious circumstances – within one week. The first, which is causing more uproar, was about Tagbo Umeike, who, according to autopsy, died of suffocation. The other two friends – DJ Olu and Chime were found dead in a car, few days after.

To what many would call a suspicious coincidence, Tagbo may have been suffocated to death inside his car, going by the lead given the police from a whistle blower and actress Caroline Danjuma who claimed she was affianced to the deceased.

Caroline who is known for some controversial altercations with celebrities was right afterwards, but not many saw it that way when she first called out Davido, insisting that the singer knew more than meets the eye.

But for the actress, who gave the police a lead, we probably wouldn’t know the extent to which Davido and his other friends were involved in the circumstances under which Tagbo passed.

That aside, 40 shots of Tequila, as reportedly consumed by Tagbo on the eve of his demise, is capable of leading any man to self-slaughter. Caroline was wrong there – a man is capable of the unexpected. Tagbo proved this, albeit posthumously, and Caroline must be too stunned to argue. How could she? Tagbo isn’t alive to claim witnesses lied.

Perhaps it doesn’t matter now that Tagbo drank to stupor, “why did you do it?” could have been Caroline’s next question. And he could have made her happy by confirming it wasn’t for the money. Yes, Caroline claimed he hailed from a wealthy family, and didn’t need a bet of N200, 000. And I bet, Tagbo could have said to her, ‘I did it for fun’.

I doubt that Caroline’s hard feeling towards Davido means that she wants him to dance naked; my diction for life imprisonment, the worst penalty for manslaughter, should it be ascertained that Tagbo died as a result of the carelessness of Davido and company.

I guess she merely wanted Davido to confirm what she already knew about how Tagbo died. She didn’t claim he killed Tagbo, but it was worrisome to her that the singer should feign ignorance of the situations leading to his death.

Now that we all know, according to the police, that Davido lied because he probably didn’t want anyone linking him to his friend’s passing, what would the police charge him for, and what would be the verdict of the court of law?

If you ask me, Davido is at the mercy of the police. It doesn’t matter what fans and foes of the singer think. The police as forerunners in this case will determine, to a large extent, what the outcome of the case will be in court – if it ever gets to the court at all.

Whatever the outcome of this matter, lessons must be learned. Youths, whether in showbiz or other endeavors must be cautioned about the slippery nature of their age. Alcohol must be condemned in the reckless form that the late Tagbo, Davido, and friends abused it.

If Tagbo was not so drunk, he probably would not have been locked up in the car as claimed, to the extent of suffocation. If his friends were not drunk too (irrespective of the degree), ‘their second’ sense would be active to know that it is dangerous for Tagbo to be locked up in the car (whether or not it was the deceased that pressed the lock button). The remote cause is the sorrow and regret that now pervade the air.

Concerning the late DJ Olu and Chime, autopsy is what everyone is waiting for, and we are sure to learn a lesson or two from their misfortune too – who knows?

[Victor Akande writes for The Nation]

Continue Reading
You may also like...
Related Topics:abuse, alcohol, davido