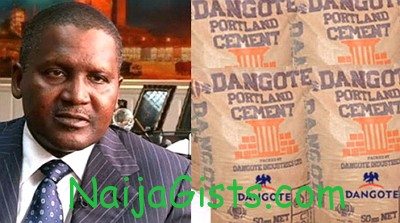 Dangote Cement Plc has suspended production of cement at its four million metric tons per annum Gboko Plant, as a result of glut in the cement market.

The staff in the plant located in Benue state, central Nigeria, have also been asked to proceed on compulsory leave.

The Group Head, Corporate Communication, Dangote Group, Anthony Chiejina who confirmed this in Lagos said the move was necessitated by the glut in the market. The glut he said was caused by the high volume of local production and the influx of imported cement, which comes in cheaper than the locally produced ones.

According to Chiejina, production figure for the first eleven months of the year shows increased local production level with supply now surpassing demand. Total supply of cement to the market at the end of November, according to him, when compared to the same period last year, has shown a record increase of 11.4 per cent, the highest ever.

He said it was therefore disheartening to note that despite the glut in the local cement market, some cement importation, though reduced, has continued, thus calling to question the rigorous implementation of the backward integration policy, introduced to encourage local production.

Giving the reason for the choice of BCC for a temporary shutdown, the Dangote Group image maker noted that “…with the dumping of subsidized imported cement in the South Eastern market, there is no way our Gboko Cement plant can survive. In fact, staff have been put on forced leave pending when the situation improves.”

“Inventory of finished products is beginning to build up at our plants. Don’t forget that projects from our investments of about N280 billion in additional capacity are already on stream, with lines 3 and 4 at Ibese and line 4 at Obajana, coming on stream early this year.

Chiejina said other manufacturers are also experiencing the same problem of low sale and high inventory and called for urgent solutions to the development.

Besides, he advised that government should vigorously implement the provisions of the cement backward integration policy that are needed to protect local manufacturers from dumping.

According to him, one potent solution is for government to consider the total ban on importation of cement in view of the fact that local production now surpasses demand for cement and in the interim also increase duty and levy on imported cement to the maximum level.

If the backward integration policy is to succeed fully, Chiejina said government should help increase demand for cement by encouraging the use of concrete roads because concrete roads are more durable and much more longer lasting. Concrete roads, he further said, will save substantial outflow of foreign exchange, while reducing imports of asphalt.

He said: “Nigerians should be proud of what the cement sector has done by making the country self-sufficient and our Ibese plant is ready to start exporting as soon as we receive ECOWAS permit.”

Speaking on the development, a renowned financial expert, Bismark Rewane, who is the Chief Executive of Financial Derivatives, expressed worry that government was yet to stop importation of cement despite the increased local production. He expressed concern over the situation in the cement industry and urged for concerted efforts to save the local manufacturers.

The value of Dangote cement, which accounts for almost a quarter of the capitalisation of the Nigeria Stock Exchange did not lose any value in today’s trading.

Rather, there was huge dumping of the stock with 3, 585,345 units sold at the same price of N121.50.The units sold accounted for a fifth of the activity at the market today, with total value of stock traded hitting N2.13 billion ($13.59 million) (Source:PM)