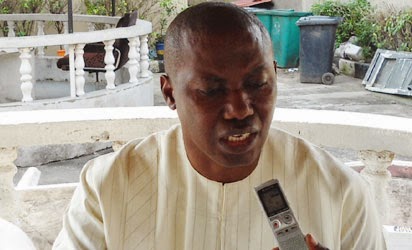 July 13, 2014 –  Alleged Lagos Ritualist Pastor Ernest Nwankwo Claims Innocence, Read His Own Side Of The Story

The Pastor who was accused of using people for rituals in Ikorodu area of Lagos state has spoken.

Ernest Nwankwo claimed he is innocent of the allegations brought against him. He alleged that his enemies are trying to run him down

Read his own side of the ritual saga:

INTRODUCTION
“My name is Prophet Ernest Chukwuemeka Nwankwo, from Nsugbe in Anambra East L.G.A, Anambra State. I have a Ministry formerly called Jesus Divine Healing and Deliverance Ministry now called Holy Family, Happy Family Ministry. I was out of Lagos for two weeks. I came back on Tuesday, June 14, and came to my Ministry on Wednesday morning.

My ministry is located at 319, Lagos road, Majudeen in Ikorodu. We carry out prayers and deliverance in the ministry.

The ministry started in 1997. We have no less than 15000 members with a spread in virtually all the major cities in Nigeria including the Federal Capital Territory, Abuja. I started as a member of Catholic Charismatic Renewal Movement before I established my own ministry. I am 49 yrs.

I do not know how these allegations of ritual actions against me started. My ministry has existed for 17 years and we have never been associated with any bad thing or any untoward allegation. We have been doing well in carrying out God’s work since we came into existence. People troop to our ministry, we organize children’s day for over 30,000 children all over our branches every year. In Ikorodu, we normally have not less than 10,000 children during the day.

We have hosted these children since we stated and we have never had any problem for more than 10 years now. We have equally been doing well in all our activities, we have rehabilitation center where mad people are healed. Relations of such people bring them to our ministry and also stay with them until they are healed after which they will go home. We do not charge them, we feed them free. So, the ministry has been flourishing in all our branches.

“When I got to the office on Wednesday, June 15 to do some work and leave for Abuja for another programme, within 20 minutes, around 7.30am, a group of people, armed with dangerous weapons invaded our ministry, breaking down everything at sight. They also descended on our members who were over 50 in attendance for the morning worship.

They were over 300 and were ferociously destroying all the properties and manhandling everybody. It was like hell was let loose on us. They were armed to the teeth and were unrestrained in their bid to destroy everything in the ministry.

They not only subjected our members to serious beating, they also took all their bags and stripped all the women and children naked. I was inside the office when they invaded the place but they later broke into my office and descended on me. We were all seriously wounded and our bodies covered with blood.

Surprisingly, four of the hoodlums took pity on me and rescued me from their clutches as they were hitting my head with cutlasses and dangerous weapons. They took me to Owutu police station where I made a statement. When they asked me how it started, I could not explain but simply told them that some hoodlums invaded our ministry for no just cause.

It was while we were there that the people that rescued me told us that a woman claimed I sent her to kidnap somebody’s child. It was like a fairy tale to me. Before the police I asked for the identity of the woman and why she claimed I told her to kidnap somebody and they said it was for ritual purposes. After I recovered from the shock, the policemen then advised that I should go and treat myself because I was bleeding profusely as a result of the beating.

By Thursday morning, unfounded rumours were flying every where. On Friday, while I was going to treat myself, I quickly sent my lawyer to Panti after hearing the rumours flying everywhere about me and that the case was transferred to Panti.

My lawyer told them that I personally reported to the police at Owute after the incident and that I was allowed to go and treat myself. He then wrote an undertaking to produce me the next Monday and we all came to Panti that Monday straight from the General hospital Ikeja where I had an x-ray. Even one of my ribs was said to have cracked and I sustained other serious injuries.

I can’t remember seeing or meeting the woman before. A lot of people come to my ministry so, it will be very difficult for me to know all of them. However, the police at Panti interrogated both of us and, in fact, when they brought her before me, I could not remember seeing her in life and I told the policemen this fact. I can’t even remember whether she called me on telephone or not because I cannot say the number of people that call me on telephone for my number is open and given to people freely to help in solving their spiritual problems.

I then asked her where we discussed this, if she has any evidence to show that she ever visited my ministry because visitors to the ministry always register their names before seeing me, or if there is any other evidence to show that we discussed that kind of thing. I punctured her story because I cannot understand what concerns me with her message with her Holy spirit.

She also claimed that I have been seeing her in the spirit to suck her blood and that of her daughter with two gallons since she failed to bring a child to me. She claimed that I used to stand at her door for two days, tormenting her, and that was why she had to go for the child when she was caught.

I asked her where we met and discussed because I have been out of town for two weeks and how did she know that I came back. She said she was aware that I came back because I used to carry out consultations. It is well known by everybody that my consultation days are announced for members of the public to come and be healed. She also claimed she called me on phone in December last year and that she came to the ministry once this year but she could not substantiate where we discussed her claims.

She was thoroughly interrogated but she kept on contradicting herself as if she was either insane or under a spell. Unfortunately, her daughter she claimed I was sucking her blood with hers whom she said was 14 years was not there during the interrogation.

I had hoped that she was there for us all to be able to decipher what her mother was talking about because she is old enough to speak for her self at 14. I have never had this kind of ugly experience and I pray never to have it again. I also pray that the police should endevour to get to the route of this case because I have suffered so much over a matter I do not know anything about.

The man that was shown saying he was kidnapped and brought from Anambra State is one of the mad people undergoing treatment in my ministry. The cousin that brought him to the ministry is Mr. Atuanya, a member of my ministry and his wife has been with him in the ministry while he was undergoing treatment. They are living witnesses and they are ready to testify to anybody that cares to know the truth.

This rumor against me is very painful to me because I suffered for over fourteen years to build this ministry to serve mankind. All of a sudden, and from the pit of hell, an unknown figure materialized from no where to pour odium on me and accuse me of ritual acts. In all these years, nobody has ever complained or petitioned against my activities in the ministry.

Instead, people have been pouring encomiums and giving glory to God for all we have been doing for mankind. The whole thing is still like a dream and I pray I would wake up and testify that it was really a dream. My ministry operates an open door policy, we have no go areas, both visitors and members of the ministry are never restricted even up to my personal office. Why must I send her to bring a child to me when I am happily married with children, what will I do with the child?

This very ugly development has affected me psychologically in a tremendous way, the emotional trauma is untold. In terms of the good will I built over the years, the name, in fact, one cannot quantify the degree of destruction done to me by this very ugly and unfounded, mischievous rumor. I have suffered and lost almost everything because the ugly news went beyond the shores of this country.

People have been calling from all the parts of the world and you know that bad news travels faster than any other thing. It is very unfortunate that people believe such a story when there is nothing at all to hang it on the head of the prophet. And, when you look at the woman, you will know that she is some how deranged and we are convinced that by the time police finish their investigation, the truth will be out.

What I cannot fathom is why she choose to tell all these lies against me. She may have been sent by somebody to run me down because people in that neighborhood said they saw one mysterious SUV hovering around in the wee hours before the incident and also the mother of the victim reportedly said she saw an exotic vehicle that later picked up her children,.

Police should investigate to find out who owns the vehicle and where they were taken to. Who ever picked her children must have a link with this incident.

Police should also find out whether this is the first time she is doing this kind of thing and if it is not, how many people must have falling victims to her antics? Worse still, so far, nobody has told us where the woman is from because the way the media descended on the ministry, they left out the main ingredient of the whole matter as if they were sponsored to run down the ministry.

All I know is that she cannot be doing this alone. Her sponsors should be fished out. So far, the police has been professional in their interrogation and they made us understand that investigations will take time and that the truth must surely surface.

Inside the cell, I detested being treated like a criminal but I took it as another message point in terms of ministration after all, Jesus went through worst tribulation in life.