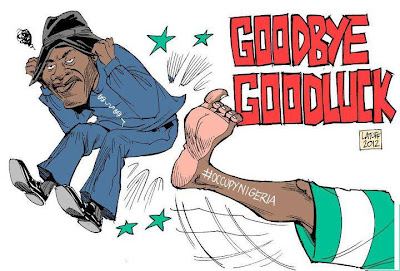 Oct 14, 2014 – “Allow Igbos Or Northerners To Become Nigeria’s Next President, Jonathan Is A Failure” – Omokehinde

This is a response to Obasanjo’s press statement on Sunday on why PDP ought to have given a Northerner a presidential ticket for 2015 election.

Even though I disagree with former president Olusegun Obasanjo in many fronts, but this time around, I feel strongly that a northerner should be elected Nigeria’s next president for many reasons. Chief Olusegun Obasanjo is the pioneer of all Nigeria misfortune, setbacks, many problems and our present badluck. After sixteen years of gross corruption, selfishness, setbacks, and all sorts of political craziness by southern presidents (Olusegun and Badluck Jonathan) in Aso Rock, I think it would be wise for us to elect a competent and patriotic Nigerian citizen from the north for the unity, progress and peace of our beloved nation. A competent man with integrity from north can become Nigeria next president for the following reasons:

First, it will be a fair game in our young democracy to have a northern president after 14 years of president Obasanjo and Badluck Jonathan combined. I don’t believe in zoning presidency because it doesn’t represent true democracy in anyway. But if we have a great leader with the heart and willingness to serve the people’s interests, his tribe or language should not be an hindrance. This is what is called fair representation in a true democracy. Some self centered politicians/elites argued that power should remain in the south because they are afraid of a Muslim president. This group of unpatriotic Nigerian politicians are not honest because they are only interested in the continuation of Jonathan’s failures, corruption and mismanagement so that the looting will continue. This current administration is far worst than Abacha regime in many ways. Abacha was president for six years and he did not add one kobo to the prices of petrol and kerosene during his regime. Though Abacha was brutal,but he was fully in charge of the nation’s affairs and there was no bombing of innocent Nigerians by terrorists until we reelected the most incompetent president ever in Nigerian history in the 2011 general election.

Moreover, Islam is not Nigerian problem. Our problems are corruption, looting of national treasury, selfishness, incompentence, mismanagement, unpatriotic altitudes, election fraud, youth unemployment, bad leadership, outdated physical infrastructures, shattered educational system, and lack of vision to move our nation forward by Nigerian corrupt politicians. As a Christian from Southwest region of Nigeria, I see Islam as a religious of peace for those Muslims that are studious, and those practising Muslims in this category refused to be brainwashed by religious fanatic and mind manipulators.

In addition to that, some of our people have short memories. How? Have you forgotten that this present democracy was crafted by a northern “Head of State” after the sudden death of General Sanni Abacha. General Abdul Salam handed over power voluntarily and peacefully after his brief stay in power to Obasanjo in the year 1999. He was not power hungry and a liar like president Badluck Jonathan. So what is wrong with a failure like president Jonathan to hand over power to a competent and patriotic president if he comes from the north?

Finally, those unpatriotic Nigerians pushing this failed president to remain in power against the will of the people will soon desert him when things finally get out of control. As long as Nigeria remain one indivisible nation, no Nigerian should be afraid of anyone coming from any section of the country as our president. After all, Jonathan is from the minority of the minority in Nigeria current geographic setting, but yet he became Nigerian president twice. He was first sworn as Nigerian president after the sudden death of president Yaradua, and he was reelected again in 2011. President Jonathan openly declared many times during his reelection bid in 2011 that he will not seek for any reelection come 2015 if Nigerians give him another opportunity to serve. Today, president Badluck Ebele Jonathan is spending 20 billion dollars looted money from the NNPC account to bribe his way to power against the will of Nigerian people.

Only in Nigeria can a failure like president Badluck seek for reelection with total disregard people’s voices or votes in our corrupt political setting. I’m not afraid of a northern or Igbo president as long as he has vision to move the nation forward, have confident, competent, smart, patriotic, and the willingness to unite us and destroy Boko Haram insurgency. Patriotism, good management skills, competency, integrity, intelligent, and discipline are some qualities of a great president and a leader, and it so pitiful that president Badluck possesses none of those mentioned qualities. I will rather cast my vote for patriotic and competent Muslim candidate in any election rather than vote for a cultist, unpatriotic, corrupt and incompentent candidate who disguised as true Christian.

My people, Is time for a change in order to move Nigeria forward.

About the author: Omokehinde writes from Lagos