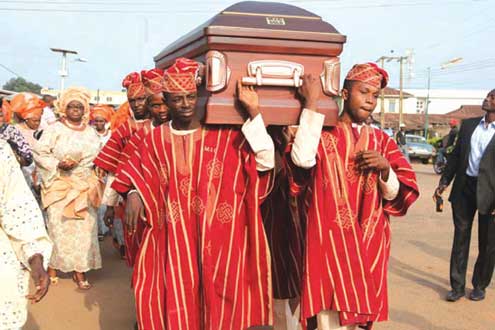 Iperu-remo in Ikenne Local Government area of Ogun State, southwest Nigeria literarily stood still for culture icon, Ambassador Olusegun Olusola this morning as markets were closed and shops with other commercial centres were under lock and key as he buried.

The casket of Ambassador Olusola was brought into Iperu-Remo at about 8.16 a.m and taken to his residence at TV House station area, Iperu-Remo, where it laid-in-state from 9-10 a.m.

The body later laid-in-state for about one hour at Akesan Iperu-Remo club which the late Olusola and many prominent indigenes of the town belong to.

After the church service, the corpse was interred at his residence, TV House, station, area, Iperu-remo while a reception was held for the guests later in the day.

Ambassador Olusola, 77, died in Lagos on 22 June, 2012 after a brief illness. For many decades, he was a broadcaster and became famous when he created the television soap opera, The Village Headmaster which ran on Nigerian Television Authority, NTA for several years.

In appreciation of his contribution to his home twon, he was conferred with the chieftaincy title of Aremo Ajibulu of  Iperu-Remo while the federal government conferred on him a national honour of Commander of the Order of the Niger, CON.

He is survived by his wife, Chief Mrs. Fehintola Olusola, children and grand children.