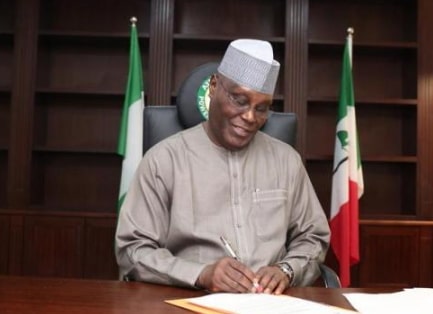 By Shuaib I. Shuaib

In the 2010 U.S Senate investigation and subsequent report on keeping foreign corruption out of the United States, all of the people that featured in the report were Africans and all the allegations related to transfers of large sums of money from suspicious sources.

On the list was Teodoro Obiang, son of the President of Equatorial Guinea who wired $110m into American banks, spent $30m to buy a house in Malibu and $38m on a Gulf Stream. Also featured in the report is the late president of Gabon, Umar Bongo, who wired at least $100m to financial institutions in the country.

Two Angolans also appeared in the report. Pierre Falcone, an arms dealer who was later jailed in France and a former head of the country’s central bank, Dr. Aguinaldo Jaime, who unsuccessfully tried to transfer $50m of government funds into a private account in California.

And then there is Atiku Abubakar, a former Vice President of Nigeria and now presidential candidate of the Peoples Democratic Party (PDP), along with his wife Jennifer Atiku Abubakar.

For Atiku, his travails cannot be erased. They have been written in books, recorded in publicly available documents and reports of the United States Senate that Nigeria’s former Vice President at point acted in breach of American laws, engaged in suspicious financial activities and as a result was barred from entering the U.S for over a decade.

Atiku’s former boss, former president Olusegun Obasanjo, more than anybody else, has spoken extensively about his deputy and was for a very long time consistent in labeling him as corrupt. But the moment Atiku Abubakar emerged as the presidential flag bearer of the opposition PDP, Obasanjo had to think twice about his hostility towards Atiku.

On its part, the United States of America found itself in a difficult position. It was in a diplomatic quagmire because here was a candidate it had placed sanctions on and yet it needed to appear neutral in Nigeria’s upcoming elections. Having one candidate who was on its sanctions list already created the impression it had a preference in the election which in reality is entirely up to the Nigerian people.

The U.S government would be in an even more awkward position should Atiku be elected president. It is a situation it had faced before in other countries and was forced to retrace its steps in order not to ruin diplomatic relations with the countries in question. In that respect, it is only natural for the U.S to remove any notion of interference in the Nigerian election and lift the visa restrictions placed on the PDP candidate.

Of course, the ruling APC and its information minister, Lai Mohammed, did see it that way. Weeks before Atiku was granted the visa, Mohammed warned the U.S government the move would create the impression that America was taking sides in the election. And when news first broke that the PDP presidential candidate had finally entered the U.S, that was exactly what it seemed like. For a short period, it seemed America was attempting to influence Nigerian voters by granting favours to Atiku, give international legitimacy to his candidacy and remove once and for all, the corrupt image that has always stuck to him like a shadow. But, unfolding events and a deeper look at his widely publicized visit, the people he saw there and didn’t see, the means employed to gain access to the officials he managed to see, and the overall outcome of the visit show otherwise.

For months, the APC has been taunting Atiku and daring him to visit the country. Central to the ruling party’s strategy in discrediting Atiku has been labeling him, the PDP under which he served as vice president as corrupt and also rubbing the visa ban on his face. For Atiku, there was too, always that genuine fear of arrest should he ever step foot on U.S soil. There is after all a U.S Senate report detailing how Atiku and his wife engaged in suspicious transactions wiring $40 million into U.S banks in breach of the country’s anti-money laundering laws.

At least $2million of those funds the report claimed were proceeds of bribe from the German engineering firm Siemens, a company which later pleaded guilty to criminal charges relating to the transaction. $14 million of these funds was used to pay a U.S university as consultancy in setting up the American University in Nigeria. Before the visit earlier this month, spokesman to the Buhari presidential campaign, Festus Keyamo, even went as far as speculating that there is a sealed indictment against the PDP candidate. It is not unusual for prosecutors to secretly charge suspect to court especially when the individual in question is absent or the investigation is still ongoing and has other suspects involved that shouldn’t be tipped off.

It was January 17, 2019, right in the middle of his presidential campaign that Atiku finally made his trip to the United State with an entourage that included Senate President Bukola Saraki, who also serves as the director general of the PDP presidential campaign, and other party officials. It was like a road show with the PDP delighting in every minute of trip, capturing it on Facebook, Instagram and reporting their every move to the media back home, all to the irritation of the APC.

From the very moment the story broke, PDP officials were not only expressing vindication of the candidate but were deriding the ruling party for linking Atiku to any form of corruption and his supposed inability to enter the U.S. There were media reports that the opposition candidate had gotten assurances that the visa was issued to him without any conditions and he would face no threat of arrest.

That however did not stop APC supporters from insinuating that Atiku was constantly looking over his shoulders all throughout the trip. Even worse, some APC supporters went as far as suggesting that Atiku had entered the U.S as an aide of Saraki and therefore went under diplomatic cover of the senate president. The claim gained enough currency that Saraki’s office had to make an official statement denying it.

Upon their return, what the PDP expected was a boost to their campaign, getting credit and public applause for visiting the United States. It was almost like the PDP felt that the election was going to take place there and they had just secured the votes of a big part of the electorate. But then it wasn’t until the visit ended that Nigerians got a true picture of all that occurred in America.

The PDP entourage lobbied to see high ranking U.S officials but only managed to see a few obscure lawmakers. The PDP entourage even stayed at Trump International Hotel hoping it would earn them favour with the U.S. Well, it had the very opposite effect. The move once again put Atiku’s corrupt past in the news and the huge cost in engaging a lobbyist to make the trip happen was highlighted.

And that is what the U.S media ended up reporting about the trip. It was negative coverage that further explained how, for over a decade he had been barred from the U.S under a presidential proclamation 7750 signed by President George Bush. The proclamation reportedly targeted corrupt foreign officials.

It wasn’t exactly the story the PDP was hoping would come out of the trip. But the worse part was that they paid a whopping $540,000 and a have made a commitment of another $540,000 for the privilege of getting a U.S visa and meeting a few congressmen. And in the end, it is debatable whether or not the trip has done more harm than good to Atiku’s chances of winning the February presidential elections.

Shuaib, a former editor of Leadership newspaper, writes from Abuja