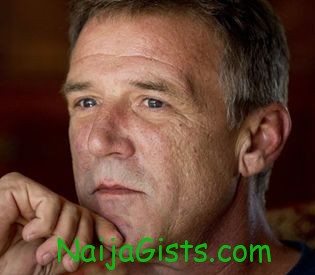 An American man by the name of Greg Ock who was kidnapped while stucked in trafic in a remote Nigerian town has come out to narrate what he went through in the hand of his captors.  naijagists.com.

According to Greg, two men appeared, one of them shooting the Georgia man’s security guard five times, while the other forced him into a tiny getaway car that sped away. The car weaved through traffic on side roads and then sped to a main road, where police had erected a roadblock. Greg Ock’s captors crashed through the barricade and traded fire with a truck of police officers, who narrowly missed the 50-year old Ock.

“I felt like I was in an action movie,” Ock told The Associated Press at his west Georgia home on Monday, a day after he returned to his family. As they were speeding away from the police, he said he told his guards: “I was more afraid of mopols than you guys.”

Ock was kidnapped on January 20 in Warri, a main city in the Niger Delta, an oil-rich area where foreign firms pump 2.4 million barrels of crude oil a day. After being held seven days, he was released on Friday.

Ock worked in construction for decades, landing gigs all over the U.S. and as far away as Abu Dhabi. He loved the work, the camaraderie and the pay, which helped him support a wife and four daughters.

He landed in the Nigerian town of Sapele in September 2010 to begin one of his more adventurous assignments, maintaining gas turbines and other heavy machinery for Marubeni Corp.

It was tough work and the perks weren’t enticing. The food was bad, he said, and the heat was unbearable. But he had chances to leave the “little prison” of the company’s base camp, often going on Sundays with co-workers and a security guard to a golf course, or to neighboring Benin to eat at a Chinese restaurant.

His journey the day he was ambushed wasn’t nearly as adventurous. He went with a driver, a security guard and a company secretary to a clinic in Warri, where he would get a checkup for a recent bout with malaria.

He took out some cash from an ATM, hopped in the car and tuned his iPod to Don Henley as the driver waited in traffic. What happened next seemed to unfold in a flash.

A gunman ran up to his vehicle and yelled “die, mopol, die” as he fired five bullets into the guard. The other gunman ordered Ock out of the car and pushed him toward a tiny red Audi. “They told me we were an easy target. We didn’t have tinted windows and only one mopol,” he said. “They told me they wanted a white guy anyways.” They escaped the city, and one of the kidnappers then called Ock’s boss and demanded about $330,000 for his safe return.

They drove about an hour, arriving at a squat shack where he was forced into a small room. He shared the room with two or three guards, a plastic chair, piles of dirty dishes, some scattered clothes and a mattress blocking the window.

The men dulled his senses by forcing him to smoke marijuana and drink Baron Del Valle red wine at all hours. He didn’t have many food options, either. Early in his captivity, Ock said he asked for boiled eggs. From then on, he got four eggs in the morning and four at night. As a snack, he got apples.

He was told few details about the negotiations his captors were working with his company, adding to his unease. When he was able to sleep, his captors often woke him by cranking an odd mix of local music and Dolly Parton classics from a stereo.

After a few days, he decided to escape. He found a butcher knife resting in a bowl and reached for it when he thought his captors were sleeping. They weren’t. One alerted the others, who “slapped me around a bit” and chained him tighter to his chair. Despite the beating, Ock said he wasn’t tortured.

The next morning, a guard pulled out a gun and threatened to kill his captive. Ock called his bluff.

On Thursday, Ock could tell the negotiations were heating up. His captors were celebrating and drinking moonshine. Two of the men left the house around noon, returning five hours later with wide smiles.

Around 3:30 Friday morning, the men dumped Ock in a desolate area with about $12 to hail a scooter to the nearest police station. Once there, he called his boss and his wife to let them know he was OK.

Ock said he wasn’t told by either his captors or his company whether a ransom was paid.

“But they seemed happy,” he said. “They let me go for a reason, and I don’t think it was because they were out of eggs.”

Marubeni Corp. on Monday declined to comment on how Ock was released. U.S. embassy officials also declined to offer any details, citing privacy concerns. He returned home on Sunday morning, arriving at Atlanta’s airport to a rapturous greeting from family and friends. There, a limousine drove him the 60-mile route to rural Bowdon. Someone told Ock to peek out the sunroof as they approached, and when he did he saw about 500 people gathered to celebrate.

Among the gifts he received was a plastic bag with only an egg and an apple. The friend who offered it to him joked that she didn’t know if he wanted breakfast or supper, so she brought both.

Ock has no plans to return to Nigeria, instead looking for work closer to home. But his wife Teresa said she doubts his kidnapping will scare him from working in another faraway gig.

“It’s in his blood to travel,” she said. “He may work here for a while. But I know him. He’ll get to itching to leave.”

For now, Ock is catching up on sleep and making up for lost time.

“It’s taken a while to process it all. For us, too,” Teresa Ock said. “We’re just so thankful for the prayers, from our church, from our community, from everyone who prayed for him.”

She glanced at her husband, who summoned an impish smile. “I guess I’ve got to go to church now,” he said.