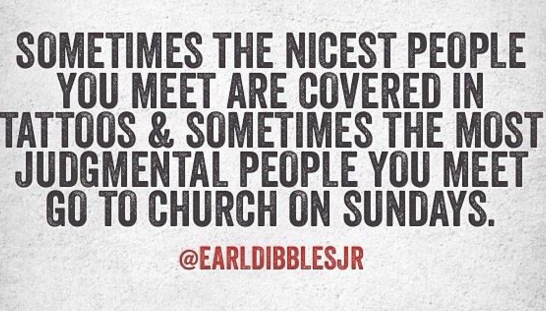 Though Shall Not Judge: An Open Letter To The Hypocrites By Eagle Adekoya

Sometimes, I wonder why we are so quick to judge or point out other people’s mistakes and misgivings not minding the fact that we also commit such offences. We are quick to castigate and cast the first stone at our neighbours because they have committed a sin we deem fit as unforgivable.

We are just ready to pull out the log in other people’s eyes not minding the big log in our own eyes (Matthew 7 verse 5, Luke 6 verses 41-42). It is annoying because people that fall into the categories listed in this article are always quick to stigmatize others. Read the book of Matthew 7 verses 1-5.

I read people’s comments on various social media platforms when an issue surrounding GAY activities comes up. They go as far as either cursing, condemning or proclaiming judgement on those citizens or folks involved. I can’t but ask myself how many of these people seating behind their mobile devices and computers making such comments are saints themselves. I simply ask myself if they any better. The fact is that some of them commit secret sins that are grievous. Some gay guys even come out openly to declare their stand (who they are) whilst others hide in their dark corners committing unforgivable sins. John chapter 8 verses 1-12.

Yes Islam, Christianity, Nigerian government and my humble self condemns GAY activities but the set of people this article addresses are those that fall in the five categories of sexual sins listed below…

You are a HYPOCRITE if you fall in any of the categories listed below…………… Feel free to write me counter accusations…..

#Team Body No Be Wood

Young ladies and guys of my generation now find it normal to sleep around with themselves outside the circles of marriage. They have sex at will on daily basis as if it is food to satisfy their hunger. People who fall in this category when approached or told they should desist from such behaviour and acts they simply come up with the excuse that #BodyNoBeWood and yet we find them in the mosques and churches on Fridays and Sundays respectively. You have no rights to condemn a GAY fellow because you are not any better.

Those Who Cheats On Their Spouses

Serial cheats are on the increase on daily basis and that’s the simple reason for increased cases of divorce in our court rooms. Husbands and wives alike no longer find anything wrong in breaking the trust of their spouses by sleeping around. How would your spouse feel when he/her finds out what you have done. Some people can’t stand it so much more that they commit suicide. Now isn’t that a grievous offence our government should probably enact a law against. When you approach people in this category and tell them how they are hurting several souls on daily basis by breaking their Marital Vows they simply tell you they have got only one life to live and must live it to the fullest. Hebrews chapter 13 verse 4.

Some guys are of the habit of patronizing prostitutes and some ladies prefer to sleep around with married men for money and short lived satisfaction. When approached they simply give you excuses and tell you that there is nothing bad in using what you have to get what you need. I must confess that this excuse leaves me wondering if really they have exhausted all options before towing their present line of action. Self control and discipline is lacking.
Rapists especially those that prefer to have sex with under aged children.
Of late there has been an increase in the reported cases of rape of small children in the news. Imagine rapist and paedophiles condemning others because they engage in GAY activities. God will judge us all.

Do you pleasure yourself either male or female all because you can’t control your sexual urge per time? You hide in your room or toilet to self pleasure yourself and come out to condemn gay activities on various social media platforms God is watching you in 3D.

All the points listed above falls under Sexual Sin as long as the Holy Quran and the Holy Bible is concerned.

So because your sins have not been exposed doesn’t mean you are a saint or justifies our actions. Quit being a Hypocrite and check yourself. Get help if need be. Repent before it is too late.

You and I have no right to condemn or judge anybody (Matthew 7 verse 1, Luke 6 verse 37). Let’s just pray for the GAY folks out there, on daily basis to come to the understanding of the truth.
I forever belong to the #Team Man and Woman forever.

I drop my pen at this point. A word they say is enough for the wise.

About The Author: Article Written By Eagle Adebowale Adekoya, adekoya.adekoya@yahoo.com, 08060966241]