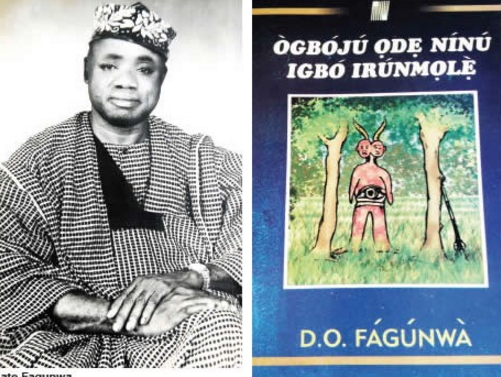 For those of us of a certain age, predominantly over fifty, there used to be a thing called a Yoruba novel. Yes, that’s right, a novel written entirely in Yoruba.

The one author whose books we read at one time or another in secondary school was no other than D. O Fagunwa whose novels “ Ogboju Ode ninu Igbo Irunmale “, “ Igbo Oludumare”, “Ireke Onibudo”, “ Irinkerindo ninu Igbo Elegbeje” and “ Aditu Oludumare” kept us enthralled with tales of supernatural folklore and tradition in way never before done. To ensure a wider readership his first book was translated into English by Wole Soyinka in 1968 as “The Forest of a Thousand Demons”

Sadly he died in 1963 and since his death there has been little or no attempt to encourage the genre back into mainline publishing. Nollywood has done a great job churning out Yoruba movies. There are Yoruba T.V programmes,plays,theatres and music but no original Yoruba novels.

One writer who tried his hands at writing an entirely Yoruba was the late Afolabi Olabimtan who published two novels “Kekere Ekun” in 1967 and “ Ayanmo” in 1973.

Sadly not even our higher institutions or publishing firms are doing enough to encourage the next generation Yoruba novelist/writer. In the past ,organisations such as the African Heritage Research Library and Cultural Centre in association with the Society of Young Nigerian Writers have organised Yoruba Literature Writing Competitions in additions to arranging a ‘D.O Fagunwa’ night to celebrate the works of the late author and Yoruba fiction. Not much has come out of this.

The Yoruba language is spoken by more than 30 million people in Western Nigeria and in neighbouring countries of Togo and Benin. It is studied as a language in many of our universities and even abroad at SOAS University of London and in more than forty-seven universities in America.

There have been translations of such great works like ‘Things Fall Apart’ which was translated by the late Chief Wale Ogunyemi into Yoruba and titled ‘ Igbesi Aye Okonkwo’ and some others but very few originals.

With our younger generation growing up on a staple diet of Western fiction and indigenous published English fiction it won’t be long before the Yoruba novel becomes a relic of the past, joining a host of other forgotten languages, such as Latin, that books are no longer published in.

The advent of print-on-demand books, ebooks and blogs have made it easier for anyone to be published these days, reaching a wide audience spanning the world. Setting up a publishing house to publish Yoruba novels (- or any of the other ethnic groups’) won’t be too difficult – or expensive. Existing higher institutions can offer classes in creative writing in Yoruba as they do English to encourage and help would-be writers. There is a potential huge readership base out there but no one to supply the demand.

And to Professor Wole Soyinka, and others out there, it’s not too late to pen that last great novel in Yoruba.