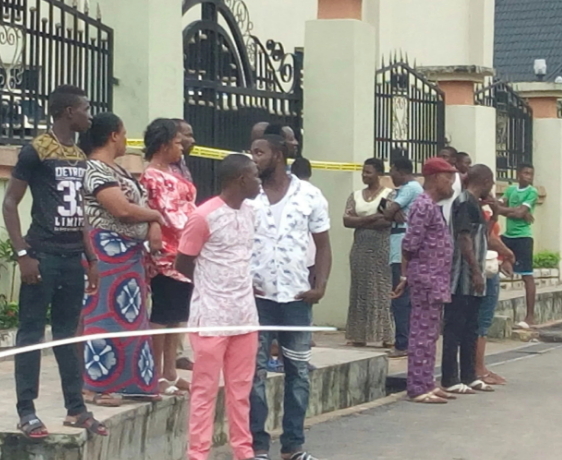 One of the victims of Sunday Church attack in Ozubulu Anambra state, Mr. Samuel Ndulue who sustained injuries in both legs has recounted what what happened.

“I was sitting on the third row, right in front of the church when it started. It was only one man that entered the church, but I suspected that their members were in a car outside. The man was dressed in all black attire, with a fez cap. Immediately he entered, he did not say a word or make any enquiry, the man entered through the back door that faces the altar. So, he stood close to one of the three doors of the church and immediately started shooting at everyone.

“I took cover, lying on the ground, but as the man continued to kill people, I decided to stand up and run towards the door because my thought is that the man may have enough bullets to finish everybody. It was while rushing towards the door that I broke my legs because the man was standing close to one door, leaving us with just two doors to escape.

In a state broadcast, yesterday, Governor Willie Obiano said the state was dealing with a dangerous gang war that spilled over to Anambra State from another African country; a tragic dimension of a long battle between two business partners from the town.

“I have been fully informed that this dangerous conflict has been going on for a while in the country where they both live outside Nigeria before they decided to bring the conflict home.

“But let me assure you that Anambra is too hot for them to operate. This explanation, I believe, has erased the fears that the incident may have been caused by either some terrorist organisations or some members of some groups of agitators in the country. Brothers and sisters, what happened in Ozubulu was neither a terror attack as we know it, nor a violent action by some agitators.”

The state Police Command said it had arrested some suspects.

“Some arrests have been made but I cannot disclose their names and numbers now in order not to jeopardize the investigation,” Commissioner of Police, Mr. Umar Garba said.

He, however, urged the people to give police relevant information on crimes and criminalities, especially on the Ozubulu massacre, assuring that the police would bring to book the culprits.