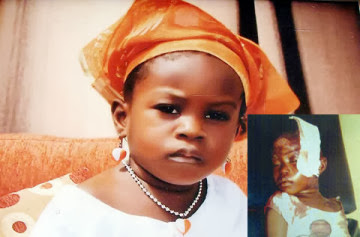 When three-year-old Ikeoluwa Olaniyi was playing with her friends in her grandfather’s compound in Ire Akari Estate, Isolo, Lagos, on September 3, 2013, little did she know that death was lurking.

PUNCH Metro learnt that a teenage motorist, Chinyere Wagbaranta, in company with her brother, Chisom, and a police corporal attached to Police Mobile Force 22, Felix Adebayo, in a Mercedes Benz Sports Utility Vehicle, drove into the compound carelessly, hitting the little girl and crushing her skull.

The victim’s grandfather, Adesola Elegbede, who spoke to our correspondent while fighting back tears, said Ikeoluwa was his first grandchild.

He said, “Ikeoluwa lives with me and my wife. Her father works in a bank and her mother works with an accounting firm, which are both located on Victoria Island. Ikeoluwa attends a school in Ilasa, which is not far from our house. She stays with her parents during the weekend.

“On the day of the incident, I came in and saw her eating yam just outside the main door and told her to go inside. A few minutes later, I wanted to go to my friend who lives a few houses away from mine and Ikeoluwa attempted to follow me but she met some of her friends playing in the compound so she joined them.

“A few minutes later, I heard a loud scream that Ikeoluwa had been crushed by a vehicle in the compound. I ran to the scene and observed that the side of her head had been crushed. I saw the vehicle that hit her but the occupants had fled. I carried my granddaughter to Good Health Hospital, where she was declared dead.”

Elegbede said he immediately ran to the Isolo Police Division to report the matter and it was there that he met the culprits.

He said Chinyere drove recklessly into the compound because she was on a mission to fight one of his neighbours.

He said, “I was told that Chinyere and her brother hired the Police Mobile Force member, who is attached to a bank in the area, to escort them to our compound to fight one of my neighbour’s children.

“They drove recklessly from Ire Akari Road into my compound and after crushing my little girl, the armed MOPOL aided them in escaping from the scene.”

The grandfather said four days after the incident, Chinyere’s parents, in company with the Divisional Police Officer, Isolo, Adamu Ibrahim, and a chief in the area came to apologise over the incident, urging him not to pursue the case.

Elegbede, however, berated the police for not handling the case professionally.

He said, “When they came to visit me four days later, I was shocked that the DPO escorted them to my place. Why should the DPO be pleading on their behalf, telling me it was the will of God? Anyway, I told them to go and beg Ikeoluwa’s parents because I am not her father.

“On September 9, the DPO called me again saying the Area D Commander at Mushin wanted to see all the parties involved but on getting there, the DPO told us to return to his own station.

“When I noticed that the case was not being handled properly, I asked the DPO to transfer the matter to the State Criminal Investigation Department, Yaba, but he refused to do this.

“I am aware that Chinyere is 18 years old and is an adult. I have already started hearing that the police want to manipulate her age, get her a fake affidavit and give her a soft-landing. I will not accept this.”

The victim’s grandfather said life had not been the same since the incident occurred.

While pointing to the spot where his granddaughter’s blood was shed, he said, “I cannot believe this. We are still in shock. Her mother has had to take leave from work and travel out of the country to take her mind off things. Imagine us losing such a pleasant and brilliant girl?”

When contacted on the telephone, the Police Public Relations Officer, Lagos State Police Command, Ngozi Braide, confirmed the accident to our correspondent.

Braide said the matter was reported as a fatal car accident and that Chinyere had been charged to court.