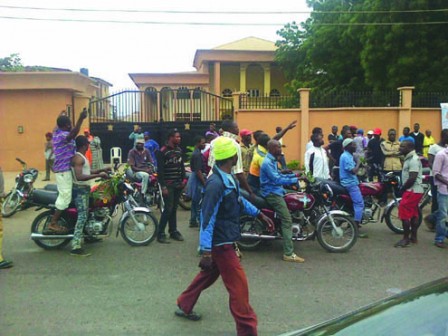 Sources said the victims, a sergeant and an inspector simply called Bashiru, were lynched when they attempted to seize some motorcycles at notorious spot called Aso Rock in Festac Town.

P.M.NEWS learnt that a team of police officers raided the place located at 7th Avenue, 72 Road at about 1.30a.m to seize commercial motorcycles parked inside the compound by owners who reside there.

However, the four officers who went on the operation on Tuesday were overpowered and disarmed.

While two of them were clubbed to death, the other two escaped.

After the mob action, occupants of the large compound fled.

An eye witness said the men came in a police van and forced themselves into the compound and started carting motorcycles into the van at that time of the night.

When efforts by the residents to stop the policemen failed, they decided to attack the officers. It was not yet certain whether the operation was illegal or not.

The residents suspected that they might have come on illegal duty to extort money from them.

The police later went to the place and took away their slain colleagues.

When P.M.NEWS visited the spot on Thursday, it was deserted and a police Armoured Personnel Carrier, APC, marked RRS 182 LA belonging to Area ‘E’ Command was stationed at the place.

A team of RRS officers from Alausa, Ikeja, came in five vehicles positioned themselves opposite the place.

Efforts to speak with the officers on ground proved abortive as they directed our reporter to PPRO.

When P.M.NEWS contacted the police PRO, Mrs Ngozi Braide, she confirmed that there was crisis in the area and a team of policemen have been posted there to maintain peace and order.

Residents who witnessed the incident said the killing of the officers was unfortunate, adding that the police should not have gone to the place at that time of the night.

P.M.NEWS learnt from residents that the place where the incident happened known is a jungle where all sorts of vices thrive.

The police knew that it is a haven where for criminality thrives such as prostitution, drug dealing and other vices.