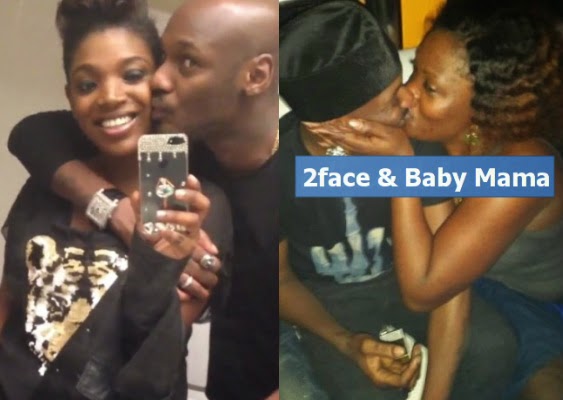 On Monday, fillers in Lagos exposed singer 2face Idibia and his babymama, Pero Adeniyi who were caught kissing at his Rumour Night club in Festac over the weekend.

When the story hit the web,  Annie chose to ignore it but when the truth came out, she denied it.

An authoritative source informed NaijaGists.com this afternoon that Annie Idibia actually caused a serious scene at her husband’s nightclub because of Pero Adeniyi’s presence.

Pero, the mother of Tuface’s three children came to Nigeria from her base in the United States of America on a business trip and on Sunday, she chose to relax with her baby father but unknown to her, some staff working as undercover agents for Annie Idibia at 2face’s-owned Rumour Night Club had contacted her.

She stormed the club uninvited and caused a bit of tension.

The club management had to forcefully drag her from the VIP section where Pero and Tuface were catching fun to another room. She was let loose after Pero had left the club.

Well in order to cover up her show of shame last Sunday at Rumours Night Club, Annie has released a Press statement and it reads:

“I am aware of the photo’s circulating the internet with my husband and Pero Adeniyi. I want to state officially that I was not in that space at that time and therefore there was no confrontation between myself and Pero Adeniyi.

Pero Adeniyi and this momentary indiscretion poses no threat whatsoever to my relationship with my husband. As a matter of fact for all of our children’s’ sake, I do encourage cordial relationships with parties involved.

This year, my focus is solely on God, Family and my Career which doesn’t give me the luxury of paying attention to any distractions. I thank you for your respect in this matter,”

Insiders also alleged that Annie has been fighting hard to get 2face from looking after the kids he had with his two baby mamas (Adesunmbo Ajaba & Pero Adeniyi) but the singer has resisted her.