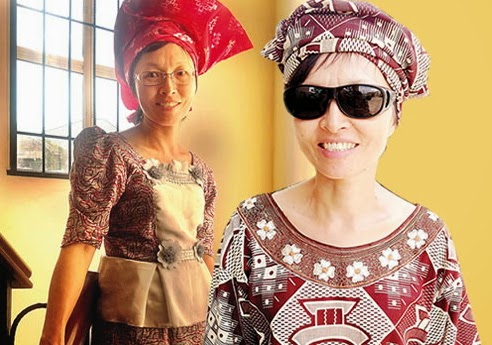 She is an optometrist while her hubby is a retired UNICEF official.

In a recent interview with Tribune, Mrs Adediran narrated how her choice to marry a Nigerian caused her dad to disown her.

When did you get married?

How did you meet your spouse?

I became a Christian when I went to  Australia   in 1981 for my A’Level studies.  In 1982,  I was in Brisbane, where I studied Optometry  while he studied  Public Health Engineering. We both belonged to Overseas Christian Fellowship (OCF) and  he was  the president. The fellowship held its convention at the time we were rounding  off our courses. We   were in the dining room and I wasn’t feeling fine, I therefore asked him for a pain reliever which he gave me. That was the first time we  held a close gaze. I felt a  strange feeling within me and his  thought didn’t leave me.  It was same with   him. He later  told me his mind but what   got him confused was the fact that  he was coming back to Nigeria  a week after. Since I have learnt to hear from God, I prayed and He gave me Psalm 112 as a confirmation and then I knew there was no going back. My profession was then  in great demand in  Brisbane. I therefore  got employed  immediately after graduating. We thus  got in touch  through mails and phone calls.

Didn’t you entertain any fear marrying someone outside your country and continent?

God gave me   a word in Psalms 45 and   I held on to  this.  It was a lot of stress because I didn’t have the support  of  my family. My maternal grandmother on her part was concerned about the distance. The Bible was what gave me comfort.

How did your family receive the news?

I wrote my dad and asked, ‘Is it okay or alright if I marry a non-Chinese and non-   white?’  I intentionally didn’t say African or Nigerian. He replied ‘Please consider very well.’  He later  sent my aunties to me in Brisbane to discourage me. My father was very authoritative. He later came, asked me to resign and   come back to our town,   Penang in Malaysia.  Back home, my   family members and relatives kept on  trying to persuade me to let go of  the relationship. They   made jest of   African   black skin and   said their lips were thick and they were hungry.   They referred to my white skin as milk and my husband as coffee. They also taunted me that no children of mine would look like me.

What effect did this have on your relationship?

We were still getting in touch and my dad knew this. I sometimes spoke with him on the phone. My dad never stopped or scolded me. My father didn’t actually understand   English Language   and so didn’t understand what I was saying.  I came to Nigeria in 1987 to   pay him a visit.  I told everyone else  except my dad and stepmother. My husband was then staying at   1004 in   Lagos.  It was  during this  visit that  he has  got a job with the United Nations Children’s Fund United Nations Children’s Fund (UNICEF), after working for  some  few years   with the Lagos State government. We decided to get married, and  so we  prayed   about it and  God gave us middle of January, precisely January 16  the following year, as our wedding date.

What was your husband’s family reaction to his choice of you?

His father asked him if there was no other person  in Nigeria he could marry.  I met   some of his siblings  and we were cautious in  the way we related.

How did the wedding go?

We had it in our home  church in Penang. None of my family members attended. My father bribed my  two sisters in New Zealand  with money so as not to attend. Only my aunty and her four children attended and she came  back the next day to the hotel where we stayed weeping that she was scolded by other family members.

How long did it take your dad in particular to come to terms with your choice of husband?

I was writing him to give him update about us though he never replied. Even while in Australia, he never replied my letters aside the one I wrote on the choice of my husband. I actually never   experienced  the love of a father.  Two years after our wedding, I  travelled  home and stayed in my uncle’s hotel. I   had our first child with me. My dad also came in to see my uncle. On sighting me, he  avoided me. Again, while on a visit to my sister in  Singapore, I tried to speak with him on phone but he hung up.

What were the things you found strange on getting to Nigeria?

We were then living in Ketu in Lagos  and the way people run after molue, sell by the roadside,  irregular  power supply and having to carry buckets to fetch water  due to  lack of  water supply, the sandy paths and untarred  roads were somehow strange to me. But then, with the kind of upbringing I had, I  could adapt to any situation. Another is the family member issue. Being the first child, he had to bear the  responsibility of training his siblings and attend to some other needs or demands of his family.