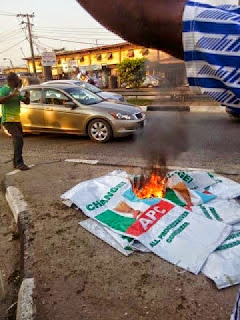 Some members of APC last week took to the streets of Surulere to protest Nollywood actor Desmond Elliot’s victory in the recently concluded primary elections.

Aggrieved APC members who felt the election was rigged to favour the actor were spotted burning some APC fliers. Most of them claimed the actor won because he has many godfathers in APC