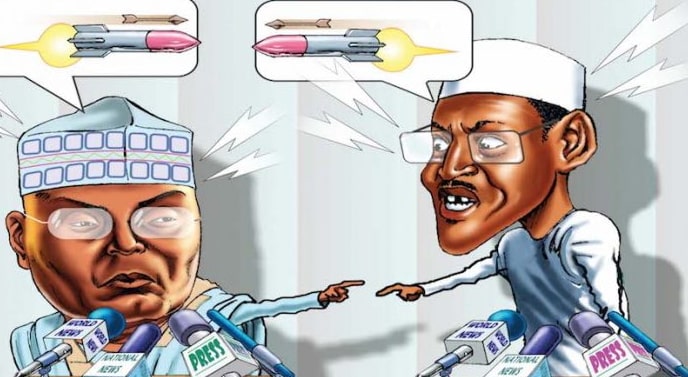 Altogether, it seems that most political parties are travelling with empty wagons; and this is why it is so hard to choose. However, slogans are used to mask the emptiness.

It’s not always easy to take a decision. In fact, experienced deciders will tell you that one of the most difficult things to do is to take a decision. Indeed, one of the hallmarks of great leadership is said to be this ability to take decisions on behalf of a group. I guess that is why I am not a leader because I cannot even decide what to have for breakfast: a bowl of cereal or a bowl of amala. To settle the matter, I assign numbers – whichever one picks number one goes for breakfast; the other goes for brunch. However, I can never tell by what rigging method amala always seems to pick number one.

Let’s face it, decision taking is no easy pick; pardon the pun. I have not been able to forget a story I read a while back about a young man who desperately needed a job. He finally got one on a potato farm. He was hired to sort potatoes into two different baskets: you guessed it – medium and large. After about three hours on the job, he handed in his notice. What was the problem? Did he not like the conditions? Did he not like the wage he had been promised? Did he not like the farm? None of those, he maintained, he liked everything, but the decisions were killing him, as he wiped the sweat from his brow!

I have been in that young man’s position many times. It is a little like sorting onions: you just cannot tell the difference between the ones labelled medium and the ones labelled small. For the sake of argument however, you hold your peace. If you ended up in Aro, how would you explain to the doctor that onions brought you there?

Now, Nigeria has to explain to the world, once again, how difficult it is to sort between difficult-to-accept candidates in an election which is making her the cynosure of all eyes in the world, not out of admiration but because no one quite trusts her. All over the world, people are wondering: what stunt of desperation these Nigerians are going to pull now in the coming election. Yes, I am also wondering the same thing: what stunts are these desperadoes going to pull now? Look at the 2015 election stunts. It started with a war of words; then swords were crossed and finally, the services of father time were engaged. In this election, we have only seen the war of words via the slogans.

One thing that characterises Nigerian political parties is this emptiness of their political wagons. To start with, there is a lack of strong manifestoes that can serve as blue prints for the ideologies and beliefs guiding the actions to be taken by the party. The reason is not very difficult to fathom. Most people who constitute the membership of these parties seem to have agreed to bury or forget their intellectual capabilities or, at best, keep them far away from the fire of politics. They prefer rather to concentrate on the one agenda that surpasses all grammaticality, which is to get their hands on the loot! This sense of conqueror-takes-all overrides all manifesto contents.

Now, that explains two things. One, it explains why many people find it so easy to cross into other political parties. They are not moving any heavy stuff. Two, it explains why people win elections and do not know what to do with it beyond continuing the chop, chop programme. Altogether, it seems that most political parties are travelling with empty wagons; and this is why it is so hard for us to choose between them. However, slogans are used as cover to mask the emptiness.

In this year’s elections, there are two main contenders: the PDP and the APC. Since these two main political parties are really no different from each other, the war of words has been left to the slogans which are just skirting around each other. Ah, plus ca change…

For the APC, the slogan is ‘Next Level’. For the life of me, I really cannot understand this. For instance, I ask myself, next level in what? Next level suggests the existence of a previous level. The only previous level known to me is the one given by the antecedents of APC. And, to be honest, they have not been too positive. There has been the serious, depleting recession which has left many people hungry. Then, there have been all these unexplained killings which the government was not able to really handle. So, if we explain the next level to be the next step to all of these, then we’re in for a rocky time indeed. It all sounds ominous and frightening.

On the other hand, the PDP’s slogan, ‘Making Nigeria work again’, is not much clearer to me either. It is so original that I believe Trump must have taken his own political campaign strategy, ‘Making America great again’ from them. Seriously though, everyone agrees that the first outing of PDP, 1999-2015, was not very profitable for Nigeria. The era contrived to insitutionalise and deify corruption to an unimaginable level from which we have not been able to extricate ourselves. So, when PDP says it wants to make Nigeria work again, I ask myself, like when? When did Nigeria ever work?

Nigeria has been one of the most unfortunate countries on earth because it has all this potential for greatness but nowhere to go, because there has been no one to lead her. Since the 1960 independence, that poor thing of a country has been rolling around like one giant whale suffering from severe constipation which no doctor on earth appears able to relieve. Imagine, a fifty-eight-year-old constipation that defies solution! Anyway, the slogans do not seem to be too helpful either, as we can see.

To make matters worse, the two political parties have gone and chosen some tired septuagenarians as their front runners. On the one hand, there is the APC fielding President Buhari of whom many have said needs to go look after his health. Indeed, the wisdom in this counsel showed in the recently televised national debates. His performance left me scratching my head and wanting to ask, ‘will the real President Buhari please stand up?’ I quite believed the original was sitting somewhere in the audience.

However, Buhari continues to symbolise, even if he is not personally leading, the anti-corruption crusade. It has been whispered though that many people around him are using that symbolisation to do that which he hates most. Since mum is the word from the man, we can only assume that all is well in Ground Aso.

The second party, PDP, has fielded Alhaji Abubakar Atiku, who, many say, cannot quite be trusted. Going by his antecedents, which include his performance when he was in charge of the privatisation programme, as the former Vice-president, including what his boss and former President Olusegun Obasanjo said about him, his utterances (for example, he is said to have said that he would pardon looters!), and so on, then Nigeria has a problem. Indeed, we can go so far as to say that the poor country is between the devil, the deep blue sea and a sharp descent into a valley of chaos.

Dear reader, to say that we are in a valley of decision is putting it mildly. We are between an APC party to whom my present words no longer mean a single thing, a PDP to whom my future wellbeing may not mean a single thing and other unknown parties with their unknown variables. Yet, come next week, I must needs use my card to pick one of them. Now, you understand why I am wiping sweat off my brow.

Atiku And His Deceitful Amnesty-To-Looters Governance Template
Open Letter To Davido, Saraki, And The Adelekes