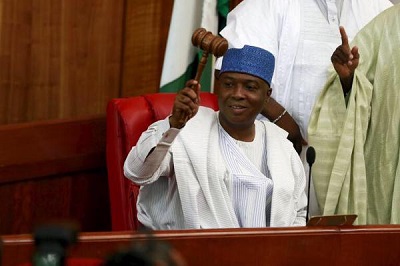 Earlier today, some APC party National House of Assembly Members liaised with their PDP counterparts to unanimously vote Senator Saraki as the next Senate President, pushing aside the candidate officially picked by the party.

The party has denounced Saraki’s emergence as the new Senate President.

Here is a statement released by leadership of the Tinubu-led party this afternoon:

All National Assembly members-elect who emerged on the platform of the party are bound by that decision. The party is supreme and its interest is superior to that of its individual members. Consequently, the APC leadership is meeting in a bid to reestablish discipline in the party and to mete out the necessary sanctions to all those involved in what is nothing but a monumental act of indiscipline and betrayal to subject the party to ridicule and create obstacles for the new administration. There can be no higher level of treachery, disloyalty and insincerity within any party”.

This is real war!!