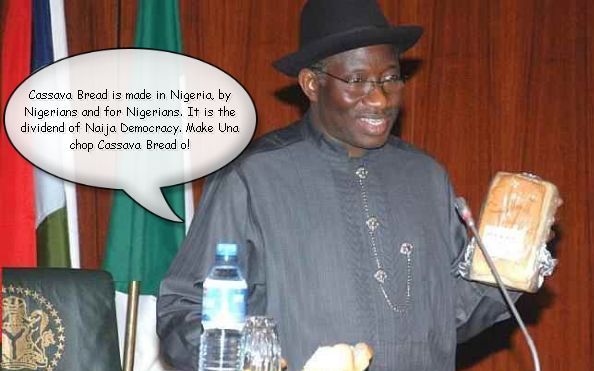 May 12, 2015 – “Apologise To Your Neighbour If You Voted For Jonathan” – Dr Perry Brimah Tells Nigerians

In 2004 when George W. Bush junior, who had called an illegal war against Iraq, propelled by exposed lies, won the US presidential (re)elections; Daily Mirror UK was not abashed to immediately call-out the conscience rejects who voted for Bush’s second term. The magazine came out with the caption, “How Can 59,054,087 People Be So Dumb?”

Nigeria’s case was called even before the elections. Nobel laureate, Wole Soyinka put it aptly (allegedly), when he said:

It was so before the elections set for February 14th 2015. It remained so before the fraudulently postponed elections were later held April 28th 2015 and it remains so, ever more so, after, with the revelations about gross squandering of Nigeria’s common wealth and the preparation for transfer of a nation so indebted it cannot afford to pay its workers salaries.

12.85 million votes were recorded for the wicked. Now, do not get it twisted; we do not believe the PDP/Jonathan scored these 12.85 million votes. More than half were made-up, rigged as we now see with Akwa Ibom and Rivers state where almost a million votes a piece were manufactured in the gubernatorial elections, over the accredited votes as INEC instruments reveal. So we do know that in the alleged PDP states, votes of millions of good people were tossed in the trash as fake ballots numbers were made up; but still the numbers of misled and wicked voters is quite uncomfortable across certain states in Nigeria.

These people (who include the likes of Nuhu Ribadu and his ilk in Adamawa, so do not think it is limited to regions), voted for a murderer of my brothers and sisters. These people voted for a thief who has confessed to be a thief and protector of thieves. There is no question with the election associated successful last minute (6-week war) campaign against Boko Haram, that these (Boko Haram) murderers who freely unleashed a pogrom on the people of Borno and Adamawa were tolerated for 6 years by Jonathan. Those who voted for him voted for the killers of innocent Kanuris and abductors of Chibok’s princesses. What type of wicked or confused people are these who would do such?

What type of people will vote for a ruler and party that have led Nigeria for 16 years (30 if Babangida, PDP patron’s military rule is included) who have led us to a state where we are so broke we have to borrow to pay worker salaries and borrow to keep up with legislooters raking in 30% of our income? Only very wicked, very misled or very criminal people will vote for such a wicked choice.

Now do not get it twisted. You do not have to vote for Buhari. Those who read my writings know that I initially supported the candidacy of the younger Kwankwaso and was a fervent red cap revolutionist, before the wise, elderly Buhari won the primaries, however if you decide not to vote Buhari, that is fair enough, you can abstain from voting then, but to put thumb down for Jonathan; you are evil, misled or criminal and there is no mincing words about that.

This is not a game. It is not some politics game as the colonialist tries to teach you where everyone has a say and choice and no one is evil for exercising his democratic constitutional rights; No! This is registered evil. To put thumb down for a man who today confesses that he is a criminal, blaming his friends and advisers, and expects to be killed for his robbery; to put ink on thumb for a man who we now all see stole the nation’s billions of dollars to pay for his personal presidential campaign; who lied about Boko Haram and allowed the murder, rape and abduction of thousands and displacement of millions. To vote a kakistocrat who with his party supervised terror of Boko, MEND Ombatse (who the Fulani’s had to help us get rid of after Jonathan tolerated them even after they killed police families), who supervised oil theft and pollution destroying the entire Niger Delta irreparably; who pays terrorists to “protect” oil lines…voting for such a man/Party is evil and in excusable. I am reading the lying Aribisala who falsely claims Buhari promised to make Dollar: Naira 1:1, I am reading Chidiebere’s “Cry not for the Igbos (2),” where he shamelessly stands by the evil of voting for a self confessed clueless thief. The Bible says of them: “Whoso is partner with a thief hateth his own soul: he heareth cursing, and bewrayeth it not.” – Proverbs 19:24.

As I have said in the past, you must apologize to your neighbor and repent to God if you voted for Jonathan and the PDP. It is sickening to live with such people; I wish they could carve out their own planet to live with Jonathan as their king upon.

[By Dr. Peregrino Brimah, Every Nigerian Must Do Something]