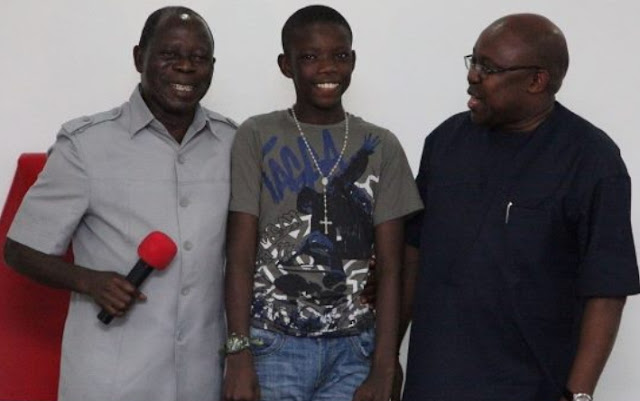 Believe it or not the 13-year-old Benin boy who got nabbed by FAAN officials in Lagos last month after a 35-minute flight on Arik Air plane from Benin to Lagos is now a national hero.

Following his risky adventure, the governor of his state, Edo State Governor Oshiomhole has offered to grant him scholarship till University level.

Governor Adams made his intention known yesterday in a press briefing.

As we speak, star boy Daniel has gained admission into one of the best Secondary schools in Benin City.

Before Governor Adams’ promise, another group that aided his release from SSS office, De Rauf from Osun State has offered to sponsor Daniel’s education till University level

So with this new deal, the boy has two official sponsors.

Hear what Governor Oshiomhole said in a Press briefing in Edo State yesterday;

“Without meaning to encourage anyone else, we decided to support him by sending him to one of the top secondary schools in Edo State that is owned by the Government. The reason for opting for a boarding school is that we think that there need to closely watch him which his parents could not do. “He is an intelligent young man with uncommon challenges, but one that has a vision. We had him examined by people who should know and the result confirmed that he is normal”, Oshiomhole noted. “This incident was probably the kind of trigger that we needed to improve the facilities at our Airports. ……”

What a lucky boy! He has made history by force