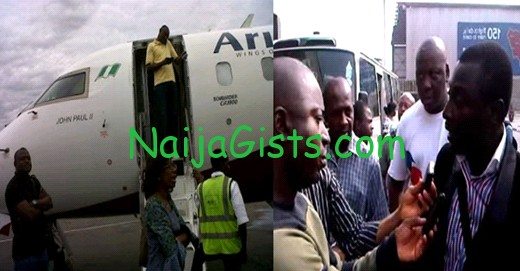 On Saturday 29 of September, 2012 at Murtala Muhammed International Airport in Lagos State Nigeria, several passengers of Arik Airline were spotted standing in the plane after an apparent flight overbook mishap. naijagists.com

In a Lagos to Benin flight, close to sixteen passengers were spotted standing while others who refused to stand got off the plane in anger.

We learnt some passengers have been waiting at the Airport since 06:30 am in the morning for a flight which was supposed to take off at 7:30am.

The flight was delayed till 11am and finished boarding around 12:00am.

Several frustrated passengers were spotted exiting the John Paul II aircraft in annoyance. See some of them in the picture above.

What would you do if you were to be in their shoes?