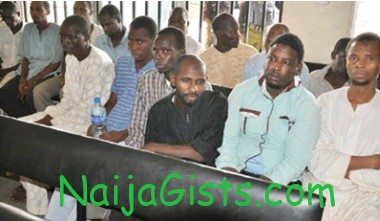 According to a military spokesman, their arrest followed the arrest of one Mr Grema Mohammed, an Immigration official who is an active Boko Haram member in Maiduguri.

One of the security personnel arrested confessed he has been an active Boko Haram member since 2009.

He also confessed he has received training alongside 15 other active members on assassination, special operations and weapon training in Niger republic.

Grema who was arrested 4 weeks ago while impersonating an army officer at a checkpoint confessed to killing several senior civil servants, politicians and security personnel in Borno & Yobe states.

Lieutenant Colonel Sagir Musa, a military spokesman didn’t specify how many arrests had been made.