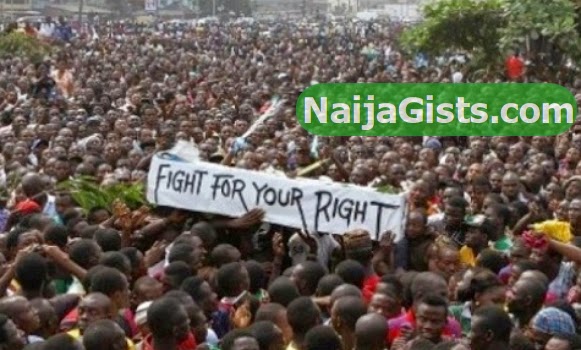 I read recently an online statement ascribed to be the words of our former president, Gen Olusegun Obasanjo Rtd. It reads, “Awolowo and Azikiwe were youths when they fought for independence, I and my colleagues were youths and we fought the civil war to keep the unity of Nigeria.

What has these present youths fought for? They should push for a revolution.” While the statements attracted attention from a lot of Nigerian youths who had one comment or the other to make, I relaxed on my seat and rehearsed the statement through my brain’s tinkering system. I tried to tinker on what our former president meant and it dawned on me that truly indeed, our youths will have to uplift their game.

Thank God Mr. Former President released his venom. In this present dispensation, our youths do not have half the chance the likes of Obasanjo, Awolowo and Azikiwe had to prove their capacity. They’ve been quieted by our bigger bullies who see it as insults on their person to have a “little boy” head them. You only find them chatting and blogging their way online about the issues they seem handicap to change.

Those in the youthful generation of Obasanjo and co. who may now brag of their tenacity and sacrifice to keep Nigeria one were not half as creative as the young men and women we have today. They however had opportunity that presented itself by virtue of the fight for independence and the civil war and they used the little in their arsenal.

Our today’s youths are creative, tenacious and determined, however, they can only make do as the hand tools of our bullish elders who only see them as political puns for their own political actualization. The elders who have amassed so much money and power wouldn’t tolerate the sight of a little brat aspiring for their position too. They shove them off at the very opportunity to uplift them and brag at the number of youths they are able to make depend on the minute resource that falls off their table.

When will our youths arise and be leaders as promised them when our elders are still the ones who want to live in the territory of power for ever with their archaic never forward thinking mindset. In our money driven polity, will the youths be able to raise the billions to fund elections?

Our elders know that there is infinitum power in the youth. They fear for any challenge and thus plot how to keep the youths at check by handing them weapons to kill themselves. They trick them with peanuts in tens of thousands of naira, and the youths sell out their soul to the godfather elders. If Obasanjo would be truthful to himself, he would have realized by now how much damage his own polices as former president made in plunging in a downward direction, the fortunes of the Nigerian youth. He couldn’t have been the one to expect youths to arise if not for his own selfish pursuit and interest or maybe he just had his senses back.

Well, the retired general has spoken. He has aired his view and the choice to wake or sleep depends on the youths. It’s the youths who will have to prove a point that if Azikiwe and his contemporaries, Obasanjo and his contemporaries and those who are busy bragging about their efforts when they were youths could do it, then today’s youth can surpass their records.

But let’s rethink. What is today’s youths having to rise against. They will have to rise against their own differences. Our fathers who history boasts to have given us this nation were youths with their unique differences and attributes. Yet they offered to give up that difference for the one united goal of obtaining independence for this great nation. Our differences are multi-complex and its being so since before our creation, it’s no excuse. We will have to defeat the differences between us. This difference arrives from our poli-ethnic inclinations. Once we can break the differences and learn to develop a united voice, we will certainly forge ahead as youths.

Today’s Nigeria has gone far from that day in 1960 when we obtained independence. We have failed though to get through to where we always wanted to be because those who should propel these movements either haven’t found their footing or have being plunged in the gutters. Our nation had suffered and is still suffering from the failures of the past. It would take us some time to get fully back on track.

Today’s youths will have to rise against the imposition of those who are anti-development. They have to develop a pro-development face. The future of this nature will be theirs to live. They must realize that how they want tomorrow will excellently depend on how today’s decisions which they must be part of are taken. Our youths must seek to be decision makers. They shouldn’t live the decision process to those men up there. They shouldn’t just be content with being political boys and puns. There has to be a reawakening, a trigger, a propensity to act.

Youths should not accept the statuesque of being use as dancers and thugs for political campaigns. In a growing political atmosphere like ours, our youths must direct their energy towards more forward thinking strategies that will position this nation where they would be proud too to tell their wards or the youths of the future that they had played a part in.

As elections arrive, youths are already taking sides, Camp APC and Camp PDP. Some are already enjoying the benefits of the political wind as they prepare their arsenals for the D-day. It’s time youths who really have Nigeria at heart awake from their slumber. It’s time for a reorientation of minds. We can’t wait forever for the change we need. We can propel that change. We can arouse our minds and search through our collective well of resources and find that collective voice that will speak in the face of deferring government policies. We can afford to push our own there too who would speak for the youths.

We don’t have to carry arms to inflict our damage or to propel that change. We may not have the arms to charge for the change but we have a strong voice in our will and passion to see Nigeria become what she has to be.

The wind of change that began since we got into the democratic arena must be propelled infinitesimally.

We want to continue to see those changes at an even faster rate. We want to dream new dreams rather than live in the ecstasies of the men of yesterday whose time has long past. We want to see new ideas freshen by youth. We don’t intend to be like America or Europe, we want o be Nigeria.

The collective youthful zeal and passion can enforce what we want. It may not be easy at the first but it would be worth the effort at the end. Let’s not be deceived by the calls of men who have passed their prime to the youths to gun for a revolution. Let’s not accept the arms offered us by the blood barons in their claimed support for youthful revolution. You will only be helping them achieve their political ambitions. Youths don’t need the gun; all they need is a united voice.

That time is now, because, the future is counting on you

Continue Reading
You may also like...
Related Topics:nigerian, Youths