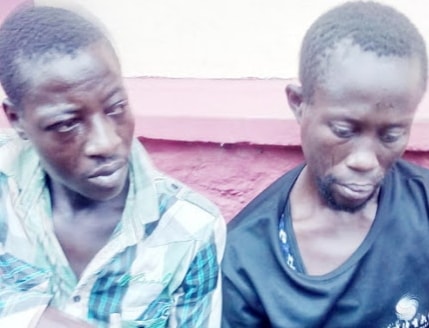 The suspects who specialise in using dusting powder mixed with petrol  to sedate and rob commercial motorcycle operators were arrested after they were intercepted by policemen during an operation a few days ago.

In their confession, the suspects paraded by the Ogun State Police Commissioner yesterday said: ”I have built a house. I was into trans-border smuggling activities between Benin Republic and Nigeria. I used to smuggle contraband like turkey and rice until I had a road accident following which I decided to join a robbery gang.” -Yemi Adeyemi

”We have been operating along Atan-Idiroko Road and stole motorbikes from okada operators. We mixed dusting powder with petrol and wrapped the substance with a handkerchief which we used to tranquilise our victims by covering their face with it. Once they fell asleep we would push them off the motorbike and steal it.” – Ikudaisi Segun

The CP assured the members of the public that the notorious robbers would be charged to court.