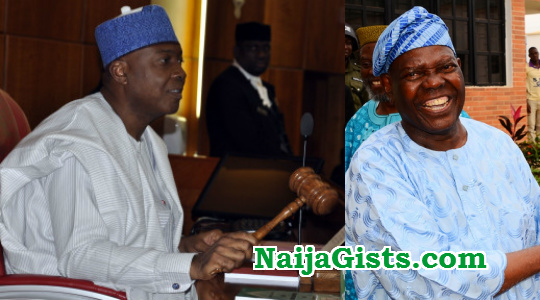 Ex- Interim National Chairman of the APC party, Chief Bisi Akande has offered some tips on how the ruling party can surmount its internal crisis.

In a  statement released yesterday, Akande blamed the ongoing crisis on some Northern elite, drug barons and pro-corruption elites who are afraid of President Buhari’s anti corruption agenda.

Akande told the APC to reposition and arrest the drift to offer Nigerians the change it promised.

Here is the full statement released by Akande yesterday:

“Some times in 2013, the Action Congress OF Nigeria (ACN), All Nigeria Peoples Party (ANPP) and Congress for Progressive Change (CPC) resolved to merge and set up a merger committee to work out the modality for glueing together as one political party under one name, one constitution and one manifesto.
“A splinter of the All Progressives Grand Alliance (APGA) sought to be included in the merger. An application made to the Independent National Electoral Commission (INEC) to this end by All Progressives Congress (APC) National Interim Committee, composed of ACN, ANPP, CPC, and factions of APGA and Democratic People’s Party (DPP) was approved in July, 2013.

“Between Bola Ahmed Tinubu (an ACN leader) and Kashim Imam (a Peoples Democratic Party (PDP) leader), the idea came up and was adopted that the new party should embark on a membership recruitment drive to certain PDP governors, whose main agenda was to see President Goodluck Jonathan out of power.

“The recruitment efforts took APC leaders to Rivers, Kwara, Niger, Sokoto, Kano, Jigawa and Adamawa states. Eventually, five PDP governors of Sokoto, Kano, Adamawa, Kwara and Rivers, together with the majority of their PDP National and State Assemblies members and other PDP National Assembly members from Gombe, Bauchi and Nasarawa, under the banner of the new-PDP, joined the APC.

“The APC thereafter organised membership registrations in all the over 120,000 polling units and followed up by using these registered members to conduct congresses in all the almost 8000 wards, in over 770 local governments, in all the 36 states (including Abuja, the Federal Capital Territory (FCT) and a convention at the National level, thereby creating one united APC party structure all over Nigeria.
“With this air of oneness, APC went ahead to conduct primaries to select candidates for state governors and Houses of Assembly and for the presidency and the National Assemblies.

“After the elections, which saw the APC to victory all round, a meeting was reported to have been held by certain old and new-PDP leaders in Alhaji Kawu Baraje’s house at Abuja to review what should be their share in this new Buhari’s government and resolved to seek collaboration with the PDP with a view to hi-jacking the National Assembly and, having got rid of Goodluck Jonathan, with an ultimate aim of resuscitating the PDP as their future political platform.

“Unknown to most APC members, while Senator Bukola Saraki was being adopted as the candidate for Senate President by certain old and new-PDP tendencies, the theory was being propagated that, like in most presidential democracies, the APC minority leaders in the old National Assembly (i.e. George Akume for the Senate and Femi Gbajabiamila for the House of Representatives) should automatically become Senate President and Speaker respectively, now that APC has the majority.

“Certain leaders felt that most past Senate presidents had come from Benue State, which Akume represented and that Benue State should be made to assume the traditional home of all senate presidents.
“At the same time certain, senators were clamouring for one of the most ranking senators anywhere outside the Northwest zone that produced the President. That was how Ahmed Lawan, who has been in the House of Representatives for eight years and in the senate for another eight years emerged as the candidate for the senate president.

“Democrats among the APC leadership insisted on selection by mock elections, rather than tribal or sectional considerations. As a result of primary elections, Ahmed Lawan and George Akume emerged as APC candidate for Senate President and Deputy respectively while Femi Gbajabiamila and Mohammed Monguno emerged as the Speaker and Deputy for the House of Representatives.

“Numerous among those calling themselves businessmen in Nigeria are like leaches, sucking from the nation’s blood largely through various governments and particularly through the Nigerian Federal Government. While all these schisms were going on in the APC, those who were jittery of Buhari’s constant threat of anti-corruption’s battle began to encourage and finance rebellions against the APC democratic positions which led to the emergence of Senator Saraki as the candidate of the PDP tendencies inside and outside APC.

“Before the party knew it, the process had been hijacked by polluted interests who saw the inordinate contests as a loop-hole for stifling APC governments’ efforts in its desire to fight corruption.
“Most Northern elite, the Nigerian oil subsidy barons and other business cartels, who never liked Buhari’s anti-corruption political stance, are quickly backing-up the rebellion against APC with strong support. While other position seekers are waiting in the wings until Buhari’s ministers are announced, a large section of the Southwest see the rebellion as a conspiracy of the North against the Yoruba.

“What began as political patronages to be shared into APC membership-spreads among ethnic zones, religious faiths and political rankings and experiences have now become so complicated that the sharing has to be done by and among PDP leadership together with cohorts of former new-PDP affiliations in the APC, by and among gangs of past anti-Buhari’s Presidency, and certain APC legislators and party members who dance round the crisis arena to pick some crumbs.

“Now that the whole conspiracy has blown open, it is doubtful if the present institutions of party leadership can muster the required capacity to arrest the drift. It is my opinion that President Buhari, and the APC governors should now see APC as a recking platform that may not be strong enough again to carry them to political victory in 2019 and they should quickly begin a joint damage control effort to reconstruct the party in its claim to bring about the promised change before the party’s shortcomings begin to aggravate the challenges of governance in their hands.”