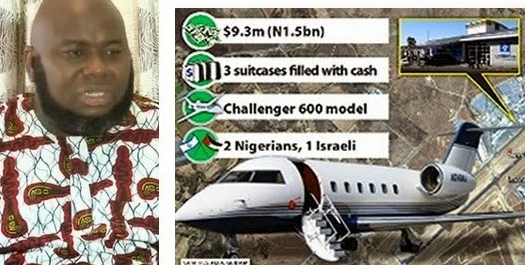 This was made known in a statement issued by APC Secretary, Lai Mohammed in Abuja today.

The party is asking President Jonathan to explain to Nigerians what Asari was doing on that plane.

APC said the questions become pertinent because even the NSA, who issued the end-user agreement for the purchase, does not and cannot purchase arms for any of the armed services. The Service Chiefs have separate budgets from the NSA for arms purchase:

Read the full Press statement below:

“Under our Constitution, the NSA is an adviser and has no executive powers to deploy troops from any of the services or purchase arms for them. That the arms purported to be purchased from South Africa were ordered from the office of the NSA is nothing but a mere fabrication, and raises serious questions about the motive for the purchase.

“Nigerians will therefore like to know on whose behalf Asari Dokubo was purchasing arms. This is very crucial because Asari Dokubo has been threatening that Nigeria will not know peace if his benefactor, President Jonathan, is not re-elected. Therefore, Nigerians will like to know whether he has started stockpiling arms to make his threat a reality, since elections are due in a few months’ time.

“If these arms are meant to fight insurgency, as the government has claimed, what is Asari Dokubo’s business purchasing arms for the Nigerian military, if indeed they were for the military?

“Does it not occur to the Nigerian government that this man who once took arms against the state may not have jettisoned his sinister plan against the same state? Which country will ever allow a man who once carried arms against the state to now be purchasing arms for the same state? Even if it is true that he is purchasing the arms for the state, what prevents him from also using the opportunity to purchase arms for his own sinister motive? Could this be why Asari Dokubo has been talking publicly and confidently, without official censure, that President Jonathan must be re-elected or Nigeria will not know peace again?” the party queried.

“…on Tuesday, we again asked President Jonathan to come clean on the US$9.3 million and US$5.7 million deals. We also asked him to tell Nigerians the identity of the two Nigerians who were on the plane that illegally ferried money to South Africa. Now that the Nigerians are known, and they are the President’s men, the story has taken a new dimension,” it said.

Hehehe Asari of all people buying arms for Nigeria in South Africa, what is the function of the military.

This is the same guy that was arrested in Cotonou last year before President Jonathan sent Private Jet to bring him back to Nigeria.

Asari Dokubo is the same guy that threatened bloodshed in Nigeria if President Jonathan is not reelected.

How can his Excellency, President Good luck Ebele Jonathan be associating with criminals?

This administration is a big time joke.