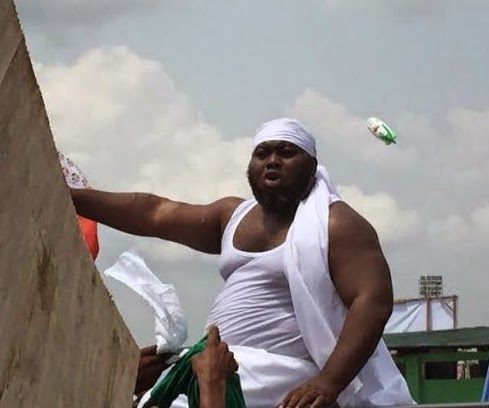 May 18, 2015 – Asari Dokubo Threatens War On Nigeria With Buhari As President, Says GEJ Restrained Him From Fighting

“Yes, a new government begins in Nigeria and a next phase of our struggle shall begin. Jonathan Goodluck presidency was like a restraining order. Now that the restraint is lifted, however, we will watch and wait, let them draw the first blood and we shall determine our best way forward. Nigeria will never be the same again. The future is pregnant.

“Let it be known that we were not defeated. It was Jonathan and his party that lost an election. We as a people, indeed, the Niger Delta region alongside the Igbos, were never defeated. We collectively rejected the born-to-rule and supremacist agenda which some of our brothers as field slaves and taskmasters supported, yet their number shows that they are of little consequence. We must however not take them for granted.

“Should Buhari who like Pharaoh has determined in his heart to turn desolate the Niger Delta region, draw the first blood by undermining certain interest of the region, then begin the systemic arrest, maiming and murder our comrades, continue the confiscation of our rights to self determination and treat the region as a conquered region, then it may be honourable for some of us to die in prison or in the field of war as nobody is afraid of him.” Dokubo further accused some ex-militants of being more concerned about how to benefit from Buhari’s government than focus on issues relevant to the region.

“Many so-called generals of the Niger Delta struggle have proven more than ever that they are petty penny merchants as they have fled the battlefield even before the first fire of the gun desperately negotiating to be accommodated in Buhari’s government as field slaves”.

“Our struggle indeed is about our collective freedom from a false and forced colonial union that has remained divided and unintegrated. It is about our being conferred a slave status and seen as a conquered people who must exist at the mercy of the overloads and supremacist class using our own brothers as taskmasters against us in a Nigerian union.”

Asari Dokubo has since left Nigeria to his base in Benin republic.

The militant leader got protection under President Jonathan administration..

Let’s see how far his empty threats will help him under Buhari’s administration.