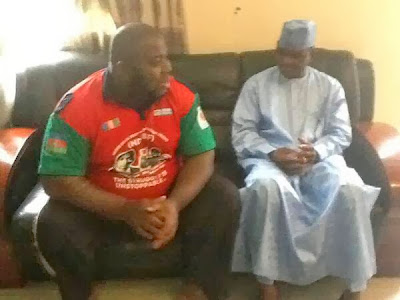 Asari Dokunbo: “My Meeting With Al-Mustapha Is To Bring Peace To Nigeria”

You cannot divorce politics from whatever man is doing. Even between man and woman, politics is involved. The meeting with Al-Mustapha is to bring peace. Faseun, Uwazuruike, Yerima Shettima, Abacha, Tony Major and over 50 different organisations were there. Government wants to be oblivious of what is going on. It is a tsunami. It is the first time that people from the Caliphate, Borno and people from other part of this country are meeting. People have come to say ‘look, whatever has happened before we should put it aside, have a focus and put an eye on the future.’ All of us have suffered from one form of deprivation or the other. All of us have been in prison – myself, Pa Faseun, Uwazuruike, Al-Mustapha, Mohammed. We have been imprisoned at one time or the other. We have all suffered one form of deprivation or the other. Our collective suffering should be a sacrifice to bring hope to our people.

We met and we saw the sincerity in them. Some people say I hate the north, but I laugh. They say I hate the Fulanis, Kanuris and I find that funny. I have two boys and their mother is a Fulani, living among Kanuri people from Borno state. One of them is named after me – Mujahid Dokubo and the other one is Nurul-Islam. They have been living with their mother. My son even speaks Hausa and Fulfude. He doesn’t even know how to speak my language. I am married to a Shuwa Arab also from Borno Empire. My in-laws come to my house, eat, sleep, live in my house and we do things together. When it comes to protecting the interest of my people, it is beyond me because of my personal life. So if people want to kill my people, I should fold my hands because I’m married to a Fulani woman? When everyone dies it will remain only my two sons and myself. God created me an Ijaw man for a purpose’