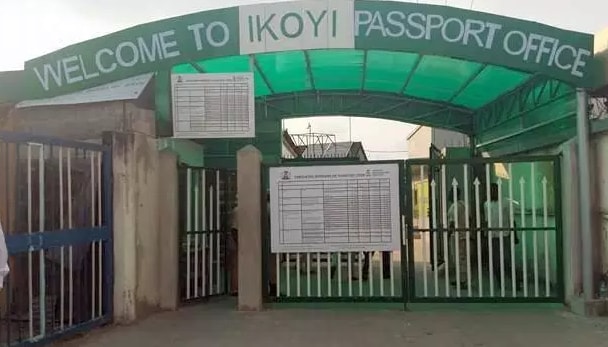 A man said to be asthmatic today died inside the toilet of the Nigerian Immigration Service Passport office in Ikoyi Lagos.

According to information from the NIS, the applicants arrived in the company of his wife at about 7am and was asked to wait till 9am.

Around 10am, he became restless and started complaining of heat and discomfort.

He went to the washroom from where he reportedly passed away.

Here is what an eyewitnesses who requested not be named said:

“He was walking up and down complaining that he should be attended to as he and his wife arrived the passport office before other applicants the officers were attending to.
“We told him that though he came early, our official resumption time is 9am, but he would not listen.
“Along the line, he said we should show him the toilet and we showed him.
“After about 20 minutes, his wife became worried that he has not come out from the toilet, but we calmed her down and our toilet attendants were asked to monitor the man.
“After about 40 minutes, we knocked several times and he did not respond.
“We tried to open the door, but it was locked from the inside.
“The mistake was that we should have forced the door open, but we were warned by our superior not to break the door until the police arrived the scene.
“The police later arrived and forced the door to the toilet open.
“What we saw was gory.
“May be he would have survived if we had rushed him to the hospital.”

“Yes, it is true an applicant died in our toilet.
“He came to our office with his wife.
“There was no queue as he did not come to collect passport.
“We attend to visitors as from 9am.
“As from 9am, we started attending to the applicants.
“Along the line, the deceased said he wanted to ease himself.
“It was after about 40 minutes that the wife started raising the alarm that her husband had not come back from the toilet.
“We thought if was the normal panic from a woman.
“But when we arrived the scene and he did not open the door, we called the police who came and forced the door open and we saw the lifeless body.
“The body has been deposited at a government hospital for autopsy.”