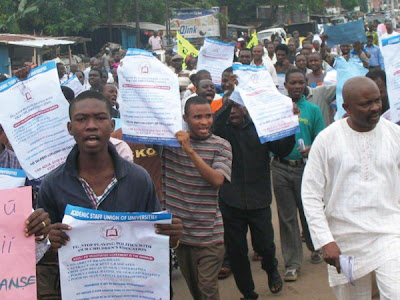 The threat to academic stability in the nation’s ivory towers because of the current strike by the Academic Staff Union of Universities (ASUU) has attracted headlines in the dailies. The media has also been awashed by many criticisms, most of which have been directed at the Federal Government in which President Jonathan is the representational character. However, it appears many of the critics have failed to consider the other side of the coin, which is one of the essentials in a debate on such a controversial issue.

Therefore, the focus of this piece is to examine the purpose of the present ASUU’s strike and their sympathizers’ rage against the FG. Firstly, ASUU came up with the issue of autonomy for universities. The FG approved the idea of autonomy so long as the universities would generate internal revenue to offset their expenditure, including salaries and allowances. This government’s position provoked ASUU members.

They poured venom on the government for merely supporting the idea of autonomy – existence as an independent body! Having realized the illusion surrounding university autonomy, members of the academic union played down their demand. This raises a question on the sincerity of ASUU’S demands.

The progressive increase of education budget to 26% between 2009 and 2020 is another contentious issue in the 2009 FG/ASUU agreement. The agitation for increase to 26% in budgetary allocation, as recommended by UNESCO for developing nations, is a legitimate one. So there is need to improve the current 8% total budget to education by the FG.

However, while the FG should be chastised for its current 8% budget to education, one needs to remind discerning readers that in nations where huge budgetary allocations are committed to education, members of the academia engage in scholarly research that help to solve societal needs. Only a few of our academics engage in fruitful research capable of solving the needs of our society. Most of the university teachers set their target in journal publication that would help them gain promotion in their academic career even when such is far from rendering solution to our societal needs.

My experience as an undergraduate and post-graduate student in one of the first generation universities showed that not all university lecturers deserve mention in the earned allowance, particularly the absentees. It is an open secret that some of the lecturers who are fulltime employees in the federal universities abandon their duty posts to shuttle between federal and private universities. They stagger their responsibilities in multiple roles as lecturers–in-charge in both public and private universities sacrificing quality of delivery in the process, at the expense of unsuspecting students in public universities.

These ‘abroad’ lecturers hardly attend classes to teach in the public universities. When they return, mostly towards the end of the semester, they engage the students in lengthy, patchy lecture hours in a bid to cover a course work that ought to have been concluded before the time of exams. Any student who dare challenges lecturer’s absenteeism in public universities are often victimized with a threat of carry-over of the course handled by the lecturer or delay in graduation.

At the post-graduate level, the situation is even more unpalatable. Many post-graduate students fail to complete their programmes in line with the academic calendar due to lecturers’ negligence. They hardly spend quality time to guide and mentor their students in their long essays. With this domineering posture, a percentage of the students either incur extra year(s) or abandon their programmes out of frustration. If you would not grow grey hair while undertaking a Ph.D degree as a student, you have to not only be hard working in your research pursuit, but also be willing to worship the deified characters in lecturer’s garb! Let me add here that a considerable number of the lecturers have passion for their calling. Those ones always act right by performing their duties without compromising standard; they deserve their earned allowances and should be rightly rewarded.

The prolonged quagmire and the sit tight approach of ASUU members are having devastating effects on Nigerian students, undergraduates and post-graduates. The rot in the education sector as claimed by ASUU should not be further fertilized by ASUU’s hard-line posture. The standstill caused by ASUU/FG impasse could have been resolved if only ASUU and FG would shift ground and make concession, at least for the sake of the students who bear the brunt of the face-off.

Already, the Federal Government has made a spirited effort to get the striking lecturers back to work. The government recently released a whopping 130billion naira in response to ASUU’s demand for infrastructural development in public universities.

According to the Secretary to the Federal Government, Anyim Pius Anyim, 100billion naira is for infrastructural development, while the remaining 30billion naira has also been disbursed as part of FG’s attempt to defray the backlog of the earned allowances.

That means the federal government has shifted ground in this regard, so what is ASUU waiting for?

About the author: Felix Festus is a PhD student in one of Nigerian federal universities.