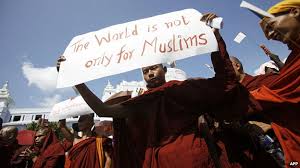 My recent article, “When Democracy Fails,” introduced the seldom analyzed dangerous outcomes of democracy today with focus on ethno-incongruous Africa.

In the day’s news, over 1000 Buddhist’s, in a wave of renewed religious violence, razed over 50 “Muslim” homes and shops in Myanmar (Burma); this coming as a continuation of a 3 year onslaught against the Muslim minorities in the Southeast Asian nation. Over 250 Muslims have been killed and 140,000 displaced since 2011 when Myanmar, a nation of 60 million transferred to democratic rule. There is similar ‘anti-Halal’ Buddhist ethnic intolerance in near-by democratic Sri Lanka. Evidently, ethnic charged democracy conflicts are not peculiar to Africa.

I am want to believe that Buddhists, like the majority of human beings are innately peace loving people, perhaps even more peace loving than the average. The massive displacement but limitation of deaths testifies to their ways. Democracy or the deemed lack of it appears to be the single factor that this intolerant violence can be related to; as with the crises and political splitting of the Gaza from the West Bank; the protracted leadership, ethnic and religious crises in Nigeria, recurrent violence in Kenya, Ivory Coast and even Eritrea. The ‘problems’ in Zimbabwe; the deadly new clime in Egypt. Are we missing something as we embrace or invite democracy as the ultimate solution to our problems? Are there more important considerations if not solutions better appropriate for the time and clime?

In modern societal planning, democracy is touted as the ultimate solution to challenges of national development and the process of democratic transition is graded and scored; but how true and useful is this, and have we reviewed the results of its implication in all and most especially new democracies? Does it solve the problems or does it in its current form, potentially create new and more dangerous intrastate explosive crises and war?
The tough question that opened up in my earlier discussion, was, when democracy fails—to give us what we want—what do we do?

One of the known challenges of democracy visited earlier was, ‘Tyranny of the majority (TOM).’ Ideally, TOM refers to the majority influences via democratic choice processes, where the choices of the majority could be highly inconsiderate and harmful to the current minority; but in appreciating the majority-minority dilemma of current democratic systems—as is occurring in Myanmar today–the mere process of defining majorities and minorities and the co-dependent relationship of a government that hopes to remain in power on these, most prominently in ethnic and religious divided countries, identifies and precipitates social rifts that may ever prove irreconcilable and hold the promise of continued hate and ethno-religious violence. TOM cultivates and germinates genocidal thinking. Soon after democracy is initiated, the larger ethnic group invariably enters into a Faustian pact with the government.

It needs to be pointed out that commonly implicated social groups are not only the traditionally recognized ‘developing’ world ethnic and religious groups, but also include socio-economic groups, ‘elite,’ ‘class,’ ‘caste,’ and the like, found in ‘developed’ states. In Europe and America, the recent ‘Occupy’ riots were a result of democratic TOM and its class delineation. A 1% ‘elite’ financial majority oppress 99% ‘masses’ financial minority. Eritrea’s G. Ande thinks the problem in Africa and the ‘developing world’ is our ‘preparedness,’ for democracy. Increased policing with sophisticated riot control apparatus and decreased privacy with invasive citizen spying programs is the way western societies curtail the real and existing potential for TOM violence. Are some of us ready for this?
With the re-introduction of democracy to Nigeria, reportedly in certain quarters, pen was put to paper and a reliable prediction of a violent disintegration of the nation in just so many years was made. Nurturing ethnic and religious divides is at its peak and physical and verbal violence is the new order of the day.

Parliamentarianism, the political system used in Israel, Germany, Mauritius, Trinidad and Tobago, etc. is more favorable for nations that are ethnically, racially, or ideologically divided. In contrast to the presidential system, voters are not narrowed down to selecting that individual leader—the president–but choose their legislators who among themselves decide who the Prime minister should be. With the parliamentary system, you vote for the ideological ideas of your party as a whole, rather than vote for an individual. The leader is from within the legislature and not without, thus decisions are made via more broad based electoral processes and not top down as in a presidential system where all executive power is vested in one externally derived and imposed person.

The decision making dead-lock with the presidential system is also avoided, giving the system greater speed. This system will definitely reduce ethnic conflict in ethnically charged African politics. The populace’s role will be the selection of and voting in representative candidates and ethno-confluent political blocks without the ‘tribal’ provoking battles that arise today from directly choosing presidential or even local government final candidates. The 1989 Lebanese Taif Agreement moved the ethno-religiously split nation from the problems of the presidential system to the more appropriate parliamentary system. We all appreciate the harmony in Muslim and Christian split Lebanon.

In the USA, the ‘electoral college,’ sits atop the ‘presidential’ system and secretly guides it. This is the same thing that the strong Iranian nation’s ‘Guardian council’ does. There are 12 monarchies within the borders of Western Europe, the vast majority being constitutional monarchies. Other than their relevance safe-guarding the constitution, the European monarchial system promotes the sense of nationalism.

These European Kings reinforce the vital recognition of person over politician and inanimate democratic process. As Pedro Schwenzer Pfau, the President of Asociación Monárquica Europea describes of Europe’s monarchies: ‘The provision of a non-partisan, non-violent safeguard – “a constitutional fire extinguisher”, should normal democratic processes ever be threatened or break down. This is what the Spanish Constitution calls the “moderating power” of the King.’ No intelligent nation that hopes to prosper can leave itself to be driven by ‘democracy’ alone, a terminology, without a form of human control of the process. This is what happens with the current presidential application of democracy in most African nations embroiled in conflict.

People run a nation, democracy cannot run a nation. In Nigeria, unofficially, the king makers, the Obasanjo’s, the Arewa forum, Northern elders, Babangida’s, Dangote’s and some more hidden brokers, supervise and ‘safe-guard’ the inanimate democracy, albeit with disastrous skewing toward their own interests. A supervisory system may need to be formalized as a matter of urgency to continually conference on the nation for the long haul. Democratic supervisors (Viziers) with the interest of the nation at heart can be picked from groups such as known community elders, youth leaders, college professors, etc.

Traditional African systems of government in addition to being ‘Philosopher Kings rule,’ the form of government preferred by the philosophers—Plato and the like—depended strongly on a council of elders who in some traditions could pass a no confidence vote, resulting in the ‘president’ having to exile or even kill himself. This council of elders are the king-makers, or the house-of-parliament. Most commonly, democratic top leadership choice was not via public participation. Apart from choosing your elders, the populace was not involved in selection or confirmation of the final leader.

His Royal Majesty, Otumfuo Osei Tutu Ii. Asantehene (Ghana), in his address presented at the fourth African Development Forum held in Addis Ababa in 2004, described the traditional African parliamentary-like system with its better organized people’s role and route of democratic choice. Most states, he said had a provision for participation in decision-making by groups of the citizenry, directly or indirectly through the heads of their clans’ lineages or families; or more directly through various types of organizations like the Asafo Companies of the Fantes in Ghana. ‘Eligibility for installation as king or chief was limited to certain royal families but among many states of Ghana the institution of king-makers was not unlike the Electoral College in some other countries’ (like USA as mentioned above).

As we count the dead and displaced due to democratic conflicts, and anticipate more deaths, sentiments and displacement, it would be reasonable to re-evaluate the system and form of the system of governance we use or pray for. There is a lot to study from and easy access to information on and offline on systems that work, have worked and how they work. We also must draw from our history, religion and culture to define the methods of social structure and political organization that can make us not only survive but excel. Evidently the system of governor selection has purposefully not been clearly provided in our religious doctrines (from my reading). Perhaps religion understands that be it democratic or autocratic, it’s about who we are and who our leaders are and not how they get there.