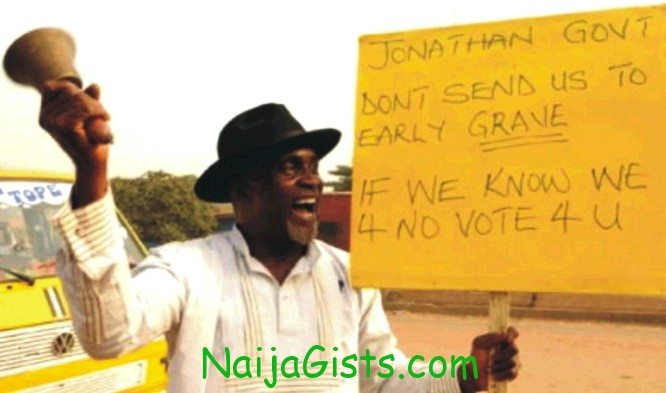 Inspite of the proliferation of churches and mosques in Nigeria , it is clear that most Nigerians are not sufficiently thankful to God.

For instance, whereas every journey is a potential opportunity for accident and death, we are wont to take every safe arrival to destination for granted. It is only if our vehicle was involved in an accident or armed robbery attack and we escaped that on Sunday, with a bandaged hand tied around the neck, we would dance Hallelujah to the altar.

Opportunities abound for the expression of thanks to God. Churches make liberal provisions for testimonies but we hardly take full advantage of this provision. This opportunity is gradually creeping into parliamentary sessions under matters of urgent importance. It is by His grace that we are not consumed.

Lest we forget, this column does not intend to dig a pit and fall into it. That explains why this writer, starting from this piece, will use every opportunity to express God’s goodness in his life and our readers are encouraged to imbibe the same habit. This testimony has been shared in many churches across the land and beyond. For the few who may have heard it earlier, no boredom is intended:

My grandson, Etinosa, is a fresher at Christ the King’s College, Gwagwalada in the FCT. The parents live in Lagos . The school’s visitation day fell on Sunday, June 3, 2012. Equipped with a Dana flight return ticket, the mother travelled to the FCT to see her son. The original plan was to quickly see the boy and return by the same Dana flight. When Mama got to school, Etinosa virtually commanded her not to go back immediately. She must stay to witness his confirmation, which was scheduled for the early afternoon of that day. She obeyed and that was how she missed the ill-fated Dana flight. And behold, the confirmation that caused the holy delay did not hold after all! For a completely different reason, it was postponed. To God be the glory. That’s faith at work.

But faith without work is dead. Everywhere we look, there is disaster lurking around. Our roads are so bad that they have become death traps. The rate at which the planes are crashing also makes travelling by air unsafe. And if you resort to going by water transportation, you will soon find that the pirates are waiting.

Today, we want to examine the issue of air safety in Africa. Within one week, Africa recorded three air crashes: two Nigerian and one Kenyan. One sad aspect of it all is that the actual casualty can hardly be ascertained. The Dana crash claimed the lives of at least 153 passengers but the number of the casualty on ground is anyone’s conjecture.

Perhaps in the spirit of competition or as a preamble, the day before the Dana tragedy, Nigeria ’s Allied Air cargo plane crash-landed near the airport in Accra , Ghana , after overshooting the runway and hitting a bus on the ground, killing at least 10 people.

And so soon, we have arrived at the point where plane crashes could be employed as a veritable means of personal vendetta. We are reminded of the plane disaster that dispatched about 122 fine military officers to their untimely graves. Tongues are wagging about the helicopter crash in Kenya that killed the Internal Security Minister, George Saitoti, his assistant, Joshua Orwa Ojodeh, and four other government officials.

In Kenya , we see some spirited efforts to get to the root of the matter. Parliamentarians and other highly-placed persons are insisting on the supplementary questions, to the extent that they are interested in the composition of the probe panels. But here, all we have are enquiries and more futile enquiries! If you want to kill any project in Nigeria , just set up a probe panel. None of the investigations into all the crashes in Nigeria has seen the light of day. All those who have seen the final report of the investigations into the missing N2.8 billion in 1983, hands up. No one.

Same could be said of the report of the pre-shipment inspection of imports scandal of the Second Republic . Maybe the report of the power probe of the Elumelu Committee will be placed in tomorrow’s order paper, ha-ha! Examples here are legion. As soon as the probe is making a head way, they shoot it down. They then begin to investigate the investigator, which is akin to engineering the engineer instead of engineering his engine. The working of the Mafia system is the same everywhere. They perfect their path so well that in the end, they succeed in making you look like you are defending a thief when they are the real thieves.

They finally got Mr. Integrity! Before he was sentenced to the fuel subsidy probe, his profile was soaring too high for comfort. They probably made him an offer he couldn’t reject. He fell flat. And the probe died!

Continue Reading
You may also like...
Related Topics:bad road, nigeria